The public is losing trust in Facebook’s ability to protect privacy and democracy, according to polls in Germany and the US, out yesterday.

In the US less than half (41%) of people trust the social media network to abide by privacy laws, a survey of 2,200 people conducted last week by Reuters and Ipsos found.

This compares with 66% who said they trust Amazon, and 62% who trust Google (owned by parent company Alphabet). Meanwhile, 60% of people in the US trust software giant Microsoft to follow privacy laws.

Another survey published in Germany’s most popular Sunday paper Bild and  conducted by Kantar showed that 60% of people in Germany fear that Facebook and other social networks are harming democracy.

Around a third (33%) of those surveyed in the German poll thought social media had a positive effect on democracy, while 60% believed it had a negative impact.

Adding pressure to Facebook, today the deadline expires for CEO Mark Zuckerberg to respond to a call to appear before UK members of parliament to answer questions about the Cambridge Analytica data scandal.

The measure of social media sentiment comes as the world’s largest social media platform Facebook faces a storm of criticism for leaking the data of millions of its users in 2014 through the UK-based analytics firm Cambridge Analytica.

Facebook also ran an ad campaign in UK and US Sunday newspapers apologising to users for the “breach of trust”.

The ads, signed by Zuckerberg, said:

You may have heard about a quiz app built by a university researcher that leaked Facebook data of millions of people in 2014.

This was a breach of trust, and I’m sorry we didn’t do more at the time. We’re now taking steps to ensure this doesn’t happen again.

The UK’s the Observer, the Sunday Times, the Mail on Sunday, the Sunday Mirror, the Sunday Express and the Sunday Telegraph, and US newspapers the Washington Post and Wall Street Journal all published similar ads.

“We have a responsibility to protect your information. If we can’t, we don’t deserve it,” said the advertisements.

Dear Zuck, we printed your words because you paid us. But have this for free: advertising is not accountability. Why did you refuse our interview request?#WheresZuck pic.twitter.com/gOXjQTjXAu

After the news broke $58 billion was wiped off the US giant’s market cap as Zuckerberg made an attempt at damage control. 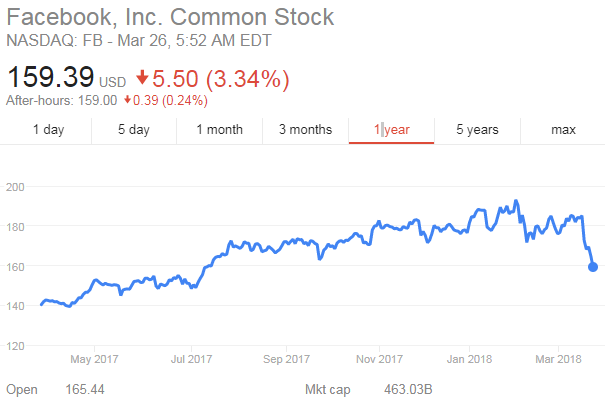 Ahead of the US market opening this morning the Facebook share price was down 0.3% in the pre-market — giving investors hope the sell off has run its course.