McDonald’s, KFC, Burger King and Dixie Chicken are just some of the increasingly popular fast food chains in England.

Four thousand fast food outlets have opened in England over the past three years, according to figures published by Cambridge University’s Centre for Diet and Activity Research (Cedar).

There are now 56,638 takeaway shops across the country, a rise of 8 percent since 2014. The majority of them are located in the poorest boroughs. 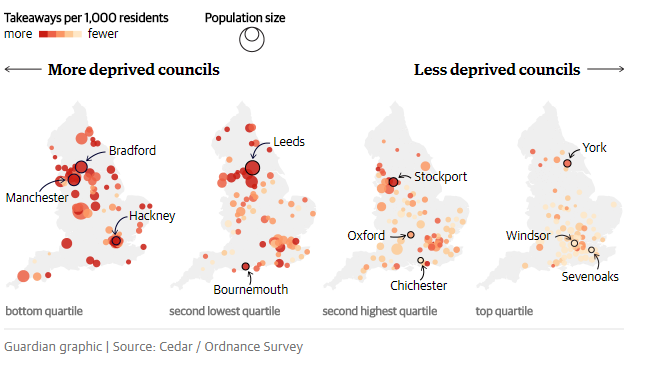 Twenty-five of the 30 councils with the highest number of fast-food outlets are in economically deprived areas like Bradford.

More than 25 percent of all eateries in England only offer consumers fast food.

“We expect everything in our lives to be instantaneous, rather than taking time to take pleasure in food, or using basic food skills to produce quickly cooked dishes at home.”

“This trend fuels obesity, and an ever greater disconnect from basic ingredients and where our food comes from. This then continues in a vicious circle,” he added.

Tom Berry, a retail analyst at research firm Global Data told Verdict that a slowing UK economy has contributed to the rise of fast food:

“The toughening economic conditions across the UK, which are felt most prominently in more deprived areas, have facilitated the growth of fast food outlets.”

Blackburn-with-Darwen has 236 fast food outlets, equating to one takeaway shop for every 625 people — the highest proportion in England.

Professor Simon Capewell, vice-president for policy at the UK’s Faculty of Public Health told The Guardian:

The junk food and sugary drinks sold by these outlets make an important contribution to the UK epidemic of obesity and diabetes. Furthermore, the much greater density of fast food outlets in deprived neighbourhoods exacerbates existing, substantial inequalities in health. These trends are very worrying.

Around one in every four adults in the UK is obese, costing the NHS £6bn a year.

Fast food outlets make very cheap, highly profitable foods that are packed full of hidden calories with huge and unnecessary amounts of sugar, fat and salt. This, combined with brilliant marketing, is unsurprisingly making many people obese, especially those from poorer, deprived backgrounds.

One in six young Britons eat fast food twice a day, according to the BBC’s Good Food Nation Survey published in September 2016.