UK airline Flybe’s struggles are largely due to Brexit factors and a weak wider market, rather than a poor performance internally.

Yesterday Flybe issued a profit warning to investors, announcing a significant drop in profit expectations for the second half of its financial year. Flybe share price fell by 37% on opening yesterday, from a 32.2p close the day before to its current 20.2p price point. 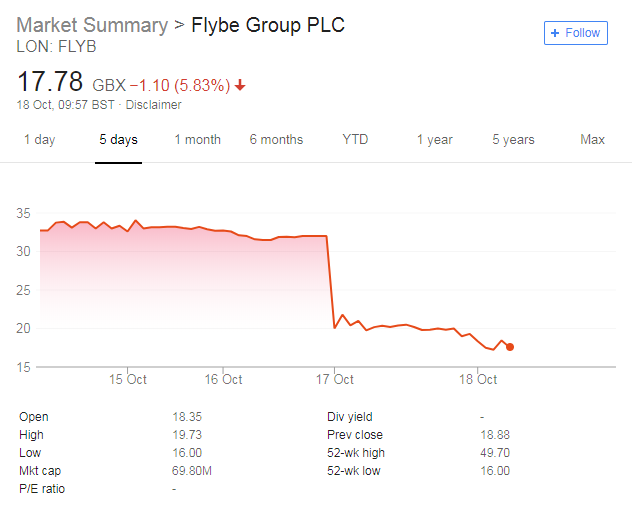 The company expects full-year, pre-tax losses to reach £12m, despite profits of more than £9m in the first six months from March. In its first half the company managed to increase load factors – how many seats are filled on average on each flight – to 84% from 76% a year ago. Revenue per seat increased by 8% compared to the previous year.

Airline costs are on the rise, and seasonal demand impact

Since April the pound has been steadily decreasing in value against the dollar.

Now down nearly 8% from its 12-monthly high of 1.4 dollars to the pound to 1.31, continuing pressure on the pound is affecting the entire industry.

Flybe, like all other airlines, has to purchase fuel that is priced in dollars and so as the value of the pound weakens, costs are increasing.

Flybe have recognised this fact; the company reports that its costs are up £17m year-on-year, and is expecting £29m worth of impact on finances.

Flybe is also expecting to suffer from the very cyclical nature of the passenger airline market.

With the industry solidly in autumn and approaching winter, Flybe has struggled in recent weeks to fill planes. It is expecting this to continue, another factor driving the profit warning and another factor out of the control of Flybe or any airline company.

This weakening of demand is further increased by the continuing uncertainty surrounding Brexit, with consumers less willing to part with their cash until the Brixit uncertainty is over.

Flybe is more reliant on the UK, as the vast majority of its business comes from UK travellers on domestic and short-haul European flights.

It isn’t all bad news for Flybe. The company has managed to increase both load factors and revenue per seat over the first half of the year when compared to last year.

The company has reduced the number of planes in its fleet and is trying to focus more on increasing its flight efficiencies to keep costs as low as possible.

Keeping costs under control is going to be more important than ever for Flybe in the near future.