The partnership is F1’s first commercial tie-up with a major mobile app.

This is the first step towards expanding our social media strategy. Right from the start, we have said we want to work with partners to bring fans closer to the amazing show that is Formula 1, an incredible mix of technology and individual talent, and Snap fits that bill.

Arthofer added that the agreement is part of F1’s desire to get more millennials interested in the highest class of single-seat racing.

We need to continue to bring new fans to the sport, by reaching out to them on social media platforms with behind the scenes, fun and engaging content. Snap’s platform is one of the most popular among millennials, a sector we are particularly keen on attracting, as it represents the future of our sport.

Snapchat users will be able to post content on the app’s Our Stories feature during the British Grand Prix on Sunday, as well as future F1 events from then onwards.

After this weekend’s inaugural Our Story at the British Grand Prix, Snap will cover the races in Singapore, Japan, the US, Mexico, Brazil and Abu Dhabi. Our Stories allow Snapchatters at the same event to contribute their unique perspectives through video and photo Snaps to one collective Story, capturing the atmosphere and excitement.

Snap shares have struggled since its market float earlier this year. This week they fell under the $17 initial public offering price — a sign investors are not impressed with Snap’s performance. 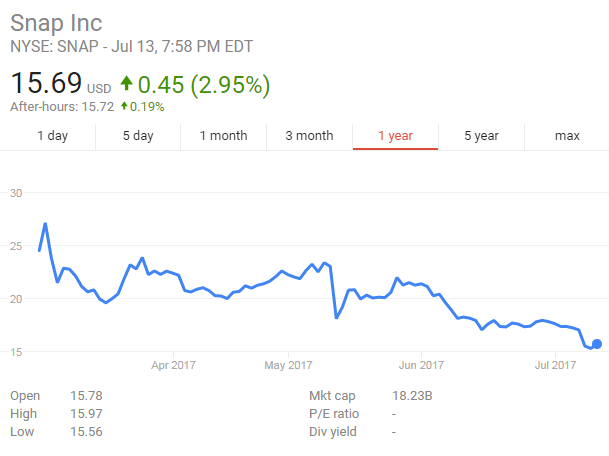