Berkeley-based RelationalAI has secured $75m in a Series B. While CEO Molham Aref is happy to boast about how this means that the company has topped up its coffers with $122m in total, he’s tight-lipped about what this means for the startup’s valuation. “We are not announcing valuation at this time,” Aref tells Verdict.

He is more than happy to talk about what the Series B will enable RelationalAI to do. Unsurprisingly, the company plans to use most of its new capital to “accelerate product development and go-to-market activities for its knowledge graph system.” For most but the die-hard tech nerds, that probably sounds like marketing gibberish and technobabble. However, Aref tells Verdict that utilsing knowledge graphs will empower companies. He claims that the startup is “redefining data app development by making it easier for domain experts and developers to work.” Okay, we’ll bite: how?

“Think of a knowledge graph system as a way to bring business knowledge much closer to company data, with a system that allows everybody to see, understand and manipulate the intelligent data,” Aref says. “At its heart the RelationalAI system can be expressed as a simple equation: data+logic+relationships=knowledge. Think, how powerful would it be to have your intelligent data becoming a main actor of your enterprise?”

This, the RevelationAI boss claims will enable ventures to tap into the some of Alphabet’s bag of tricks. “Knowledge graphs were pioneered by technology giants like Google to improve search results and LinkedIn to understand connections between people,” Aref says. “RelationalAI is making this kind of power readily accessible to every enterprise so they too can innovate and derive competitive advantage.” 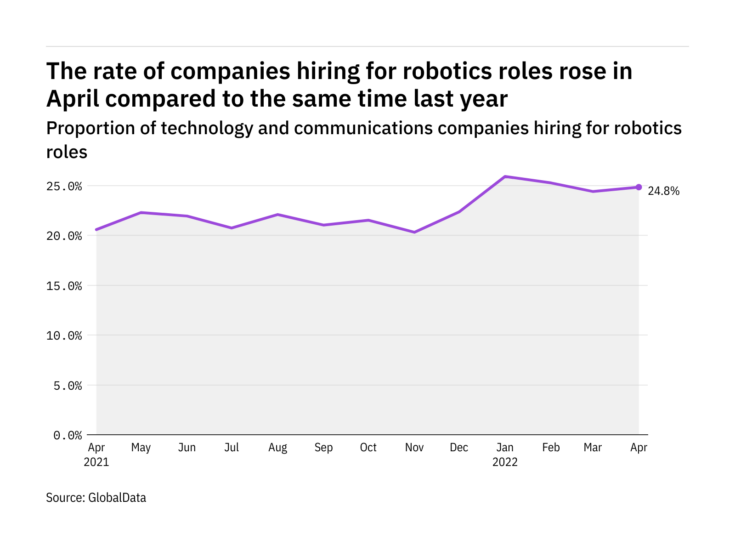 Robotics hiring levels in the tech industry rose in April 2022

So far, he claims that the company has already enabled customers to simplify their application development process at 75% lower cost, and to bust fraud.

This is also where Aref believes RelationalAI can stand apart from other contextual artificial intelligence (AI) companies: it enables companies to do several things.

“Depending on the use case, we might be compared to other solutions for specific use cases such as fraud or recommendations, but the RelationalAI approach is really much bigger than a single use case,” he says. “We’re building a system for the next generation of advanced analytics and composite AI, which will feed intelligent data apps.”

What the RelationalAI Series B round will mean

RelationalAI saw some big names back its Series B funding round. Tiger Global led the raise. The company has previously backed the likes of fintech decacorn Checkout.com and cybersecurity startup 1Password.

“Tiger Global backs dynamic entrepreneurs operating market-leading growth companies,” John Curtius, partner at Tiger Global, said in a statement. “We approached RelationalAI because we believe their system is mission-critical to the modern data landscape and just as important, they have an unbeatable team.”

“We believe that intelligent data-driven applications are the future of enterprise computing,” said S. Somasegar, managing director at Madrona Venture Group, in a statement, “They rely on the ability to bring together ‘composite AI’ workloads including graph analytics, reasoning, and neuro-symbolic AI workloads. Having worked with developer platforms over the last couple of decades, I believe RelationalAI has the potential to change the future of data-driven applications.”

The RelationalAI system is offered as a fully hosted cloud service with consumption-based pricing and self-service tooling to easily implement knowledge graph-based solutions. It will use the money to work on rolling out a self-service service next year.