UK petrol and diesel prices on the forecourts hit a 3-year high in 2018 and they look unlikely to slow down anytime soon unless OPEC can increase production.

Diesel is now over the 130 pence per litre mark, according to the Department for Business, Energy and Industrial Strategy, and petrol looks set to cross this boundary in early June 2018. These kinds of prices have been seen before, but since fuel duty in the UK has been frozen for a number of years, these increases are coming from crude oil prices.

UK consumers and drivers are right to be worried though as fuel prices affect almost every other area of the economy, raising retail and manufacturing prices across the board as companies try to compensate for their extra transportation costs.

It is hoped that OPEC will come to the rescue and increase oil production to prevent any more price rises, but it looks possible that this time prices will continue to grow in 2018 despite their best efforts. MarketLine analysis suggests that the global oil and gas market is going to grow at 20% in 2018, which is going to come directly from these price increases.

Brent crude prices have been steadily climbing since the beginning of the year from around $66 a barrel to current levels of $78 a barrel. OPEC, in late 2017, agreed to curb production and this, coupled with international political disputes involving Iran and Russia, has caused panic in the markets about security of supplies and exacerbated the situation.

For OPEC, keeping oil prices reasonable is its top priority, because the higher the price goes, the stronger a competitor the US shale industry becomes. OPEC could lose market share as a result and so will begin to increase production though 2018 in order to ensure this. 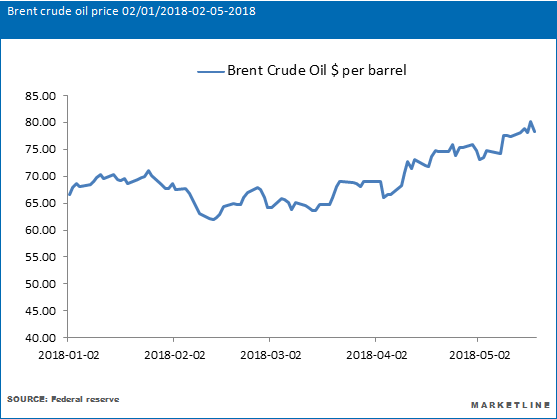 Analysts worldwide are worried about the trends in crude oil prices however, because despite the fact that OPEC will want to keep crude oil prices somewhere between $60 and $70 a barrel, it may not be physically able to, leading to prices that could push $100 a barrel this year.

Despite OPEC being likely to increase oil production levels in the next few months, there are concerns that Venezuelan oil production is at risk of complete collapse since the country’s oil output is around 40% lower than it was in 2015. Venezuela has an economic crisis on its hands at present and many fear that further substantial decreases in oil production levels might spike the global crude price close to $100.