The German housing crisis is deepening due to the government’s poorly implemented, half-baked policy.

Chancellor Merkel’s government has long made noises about increasing rents in major cities like Munich and Frankfurt. However, the shambolic implementation of its much-vaunted rent cap, coupled with a lack of action to address an acute shortage of housing stock, has only served to exacerbate the problem.

If the German housing crisis in to improve the rent cap must be properly monitored and enforced and mass-scale residential construction projects approved.

In 2015, a rent cap was introduced, allowing federal states to apply it in towns and cities in which they felt it was needed.

The Mietpreisbremse means that tenants can sue their landlords if their rent is more than 10% above the local rent index. However, the law is not strong enough to deter opportunistic landlords.

This is in part due to the fact that the benefits of charging more outweigh the penalties if you’re caught breaking the cap. Even if a landlord is sued, they are not obliged to pay back the rent already charged – they must only lower the rents going forward.

Even more worrying is the lack of understanding among tenants. Many are still woefully uninformed of their rights and many areas don’t even publish an official rent index. Where indexes are in place, they are flouted, with the Cologne Institute for Economic Research reporting that over 90% of tenants pay more than 10% above their index.

Making the publication of a rental index compulsory and severe financial penalties for exploitative landlords would be a start to tackle the German housing crisis.

As the data from Immowelt in the chart below shows, the cost of renting ‘cold’ (rent only) per square metre has increased since the cap was introduced, with larger properties seeing the most marked rises. 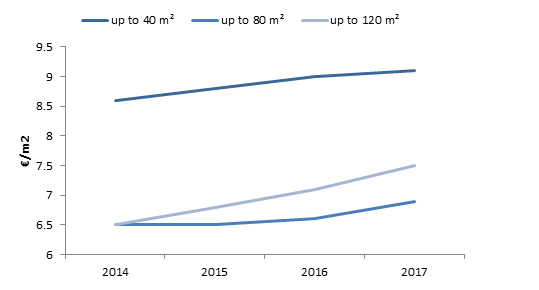 If the government is serious about the German housing crisis, it needs to approve and encourage the construction of more affordable housing stock.

The real issue in Germany is a lack of housing stock and governments (both state and federal) are not doing enough to tackle an issue demonstrated by falling vacancy rates.

Soaring rents in major cities are a symptom of a supply and demand imbalance and landlords are increasing rents.

On the surface, things look rosy, with data from the Statistisches Bundesamt showing that dwellings per 1,000 inhabitants remained stable at around 507 between 2012 and 2016.

However, data from the same source also shows that between January and November 2017, permission was granted for 313,700 residential properties, an 8% reduction when compared to the same period a year earlier.

Furthermore, a number of the dwellings being built are not affordable as profit-hungry property investors opt for expensive apartments rather than affordable homes.