Shares of Alphabet, Google’s parent company, are now worth more than $1,000 for the first time, passing the threshold shortly after trading began in New York today.

Alphabet’s shares have surged by 20 percent since January.

The company currently boasts the second-biggest market valuation in the world at $693bn, behind Apple, which is worth $802bn. 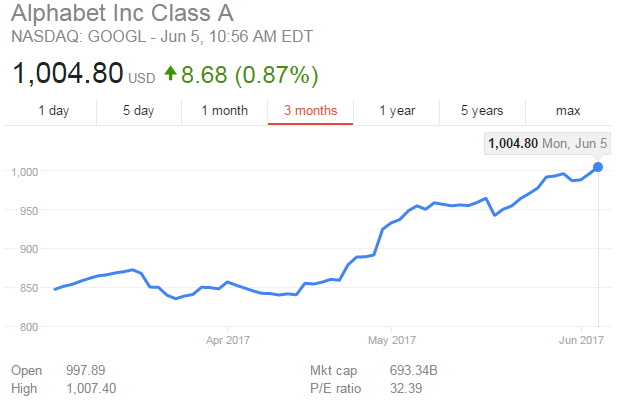 Alphabet owns a number of platforms aside from the Google search engine, including YouTube, the video-sharing website and Waymo, an autonomous car development company.

Waymo could be worth around $70bn by 2030, according to analysts at investment bank Morgan Stanley.

Google’s ad revenue, which reached $21.4bn in the first quarter, a 19 percent annual jump, is one of Alphabet’s biggest sources of investor confidence and remains the company’s main source of income.