Monthly voice usage in Honduras will continue to decline from 137 minutes in 2018 to 121 minutes by 2023, primarily due to substitution from traditional voice services to the usage of over-the-top (OTT) voice over IP (VoIP).

According to the regulator, there has been a significant drop in roaming traffic as a result of the increased use of OTT communications. 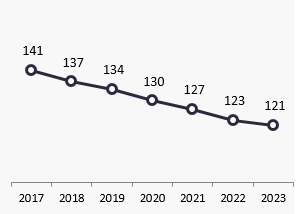 As in parallel, mobile voice revenue will drop from $358 million in 2018 to $240 million by 2023 due to an ongoing decline in voice traffic, resulting from the popularisation of OTT-based communication apps.

This increasing of OTT services will impact deeply on how telcos manage their network. For this reason, mobile operator Tigo plans to spread 4G coverage to 80% of the population by 2021. It is also modernising its network, with an objective to enhance performance and prepare the network for next-generation 5G and IoT services.

Meanwhile, Claro, the second player in the market is improving its 3G and 4G network coverage across the country.

During 2018, Claro rolled out 350 new 3G sites and 150 4G sites in areas with poor infrastructure coverage in order to improve data service offering and keep up with increasing data traffic.