While Stuart Gulliver’s final set of results at HSBC might not be quite what he had hoped, the outgoing bank boss can make for the exit having hit some important long-term goals.

The bank revealed this morning it had managed to halt a six-year decline in annual revenues — bringing in $51.5bn in adjusted revenues, a five percent increase on the year before.

New chief executive, company veteran John Flint, is set to take over tomorrow Stuart Gulliver, who is retiring after seven years at the helm.

Flint will inherit an Asia-focused bank back in expansion mode after years of restructuring during which it lost $20bn of revenue.

Shares in the bank fell in London this morning. 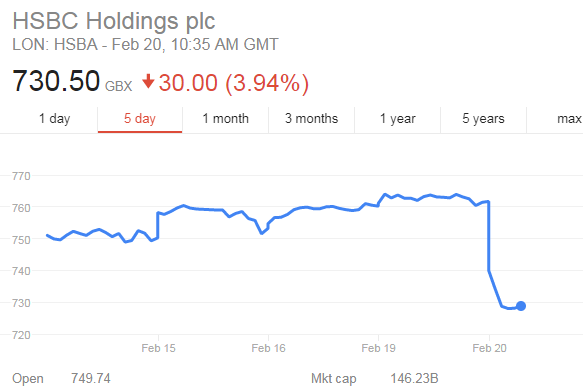 These good results demonstrate the strength and potential of HSBC. All our global businesses grew adjusted profits and we concluded the transformation programme that we started in 2015.

HSBC is simpler, stronger, and more secure than it was in 2011. It has been my great privilege to lead HSBC for the last seven years, and in handing over to John I am confident the organisation is in great hands.

These results and the achievements of the last couple of years give us a great platform to build on. I am working with the management team and the board to evolve our strategy and execute it at pace, and I will update shareholders on this work by our half year results.

The fundamentals of HSBC will remain the same as they always have — strong funding and liquidity, strong capital, and a conservative approach to credit.

Investors have become accustomed to Gulliver beating profit estimates and so this was a rare miss — he managed to beat expectations for net income in six of the previous seven quarters.

Meanwhile, it seems Gullier’s bet on Asia is paying off.

Under his watch HSBC redeployed around $100bn of assets to Asia. Fourth quarter profit in the region rose 23 percent where it makes more than three-quarters of its earnings.

As well as working to turn around financials the bank has also managed to draw a line under it recent scandals.