Taiwanese electronics company HTC has dropped the price of its virtual reality (VR) headset by $200 to take on its competitors.

Earlier this year, Facebook’s Oculus announced it was cutting the price of its headset, Oculus Rift, to $399 as part of its so-called Summer of Rift promotion.

Whilst Oculus devices will only be available at this lower price until the end of August, HTC has said its headset will be priced at $599 for the foreseeable future.

With Vive’s ever-growing VR ecosystem and the holiday season right around the corner, we believe now is the right time to make Vive even more accessible to those excited about entering the world of high-end VR.

HTC’s share price has gone up 9.09 percent off the back of the news, seemingly confirming speculation from the likes of Nanalyze that the company is now becoming a VR stock. 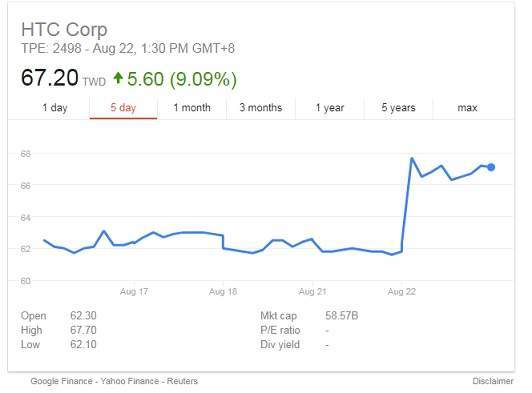 VR in general is getting more attention nowadays.

There are more brands than ever competing to sell their headsets, from lightweight, consumer-focused devices from Google and Samsung, to the heavy, game-focused headsets from HTC and Oculus.

According to analysis from SuperData Research, Samsung’s Gear VR was the most popular of the headsets shipped last year; out of the 6.3m devices sold, 4.51m came from Samsung.

However, this can be attributed to the fact Samsung gave away many of its headsets in a bundle with the Samsung S7 smartphone.

In terms of the gaming devices, HTC Vive proved to be more popular than Oculus, shifting 420,000 devices compared to the 240,000 Rift headsets sold.

As the devices and the technology become integrated into mainstream gaming, the amount of VR games has begun increasing too.

Gaming site RockPaperShotgun noted that HTC reduced the price of the Vive just in time for the release of Rez Infinite, the VR version of the original Dreamcast shooter, which Engadget has described as “pure digital nirvana”.

Digital nirvana it maybe, but on average VR gamers can only stand virtual gaming for around 12 minutes at a time.

However, dropping the price of the headsets is a smart move.

This is because it may encourage more gamers to get into VR because now they don’t have to spend over $700 on something they might only play for 12 minutes in one sitting.