IBM has achieved a new milestone in its attempts to bring quantum computing to the masses, having announced that it has achieved its highest quantum volume to date at the 2019 American Physical Society March Meeting.

The recently unveiled IBM Q System One quantum computer helped IBM to achieve the feat. Offering a significant improvement on the IBM Q 20 Tokyo, System One has produced a quantum volume of 16, almost double that of its predecessor.

Using an array of metrics, such as the number of qubits, connectivity and coherence time, as well as gate and measurement errors, device cross talk, device connectivity and circuit compiler efficiency, quantum volume is calculated to determine how powerful a quantum computer is. The more powerful the computer, the more complex, real-world problems it will be capable of solving.

The IBM Q System One has produced some of the lowest error rates ever achieved by the company, with a 2-qubit gate error of less than 2%, which is viewed as a vital step towards building a fully-functional, large-scale quantum computer.

Read more: What is quantum computing and why does it matter to business?

The road to quantum advantage

The new quantum volume record puts IBM a step closer to delivering the “quantum advantage”, the point at which quantum computers delivers a significant improvement on classical computers.

To continue its push towards quantum advantage, IBM has proposed a “roadmap” which forecasts the growth of quantum processing power and compares the progress made each year against this forecast.

“Today, we are proposing a roadmap for quantum computing, as our IBM Q team is committed to reaching a point where quantum computation will provide a read impact on science and business,” said Sarah Sheldon, lead of the IBM Q Quantum Performance team. “While we are making scientific breakthroughs and pursuing early use cases for quantum computing, our goal is to continue to drive higher quantum volume to ultimately demonstrate quantum advantage.” 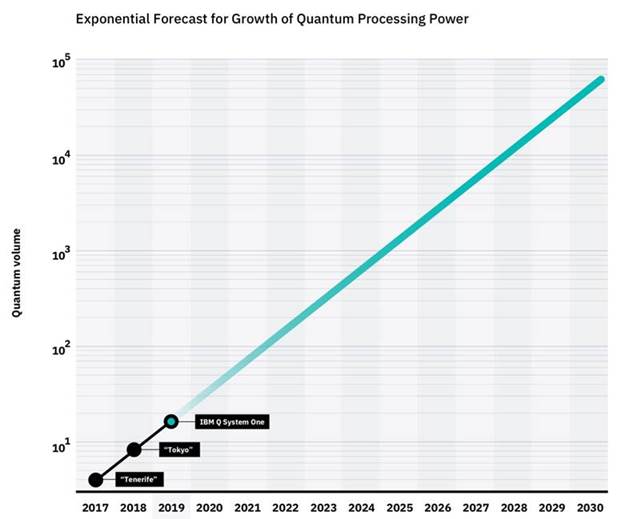 IBM hopes to achieve quantum advantage in the 2020s. That would require quantum processing power to double every year over the next decade, which IBM is on track to achieve, having seen more than 100% growth annually since 2017.

IBM and its partners are already investigating a number of potential future use cases for its quantum computer, including simulating battery-cell chemistry for electric vehicles and delivering a quadratic speedup in derivative pricing, but the possibilities are endless.

According to GlobalData, quantum computing will have a “significant impact on several key domains, where complex mathematics is required in order to support simulation or factorisation”.

While there is still a long way to go until true quantum computing is achieved (quantum computers require 50 qubits to be fully functional), IBM’s 20 qubit systems are moving towards that target.

Having become the first company to make quantum computers available to the public last May through its IBM Q experience quantum cloud service, IBM is offers a means for businesses to test the benefits of quantum technology before it has even reached its full potential.