India has emerged as a hotbed for tech unicorns. According to GlobalData, there are currently 45 tech unicorns headquartered in India, with a collective valuation of $138 billion as of November 2021.

The adoption of digital services in India accelerated amid Covid-19 lockdowns, and increasing interest from investors, in turn, led to more internet-based start-ups achieving unicorn status. There were only six tech unicorn births in 2020, but 2021 was a record year for unicorns in India. The country saw the birth of an additional 27 new unicorns up to November 2021, four times more than in the previous year.

Ecommerce is the leading theme among unicorns in India 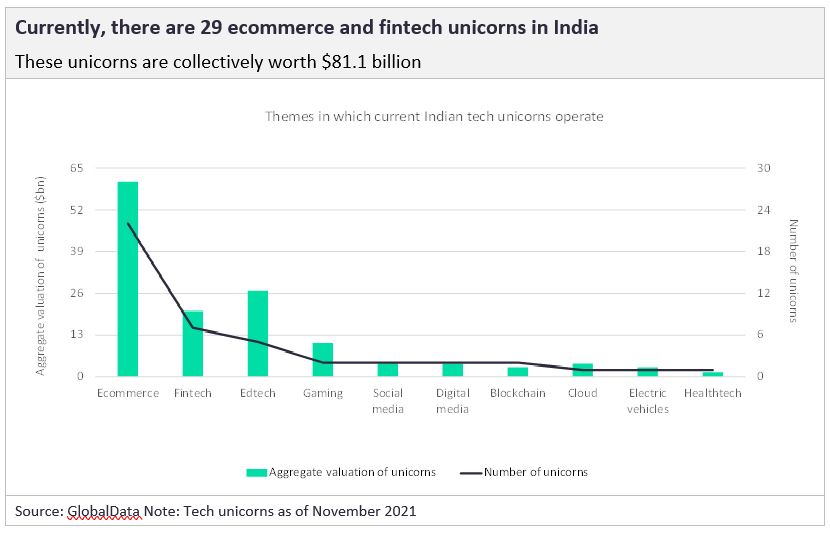 Byju’s is the largest unicorn in India

Byju’s is the largest edtech unicorn in the world. It is valued at $18 billion, with total funding to date of $5.18 billion. The company benefitted heavily from the surge in demand during Covid-19 lockdowns and its user base grew from 40 million users to 100 million users within two years as of September 2021. It is planning to go public in the next 18 months.

OYO Rooms, an online marketplace for hotels, is a unicorn valued at $9 billion, with total funding of $3.1 billion. It is also aiming to go public next year.

Dream11 is the third-most valuable Indian unicorn. It is an online fantasy sports site that rewards users with cash. It is valued at $8 billion, with total funding of $1.2 billion.

The fast digital advancement and the shift in Indian consumer behavior towards more convenience, affordability, and accessibility have led to an increase in the use of digital services. This has ade India more attractive to both investors and new start-up opportunities.