TikTok, a music video creation and sharing platform launched in 2016, has taken the world by storm in 2018. The China-based app boasts more than 150 million daily users in mainland China alone, and claims to have more than 500 million monthly active users globally.

The app, otherwise known as Douyin in China, was revealed as the most downloaded app on the Apple App Store in 2018, beating the likes of Facebook, YouTube and Instagram to the top spot.

However, a screenshot of a tweet dated 16 October, which appears to have come from a verified TikTok Twitter profile, suggested that TikTok services could be shut down indefinitely today. 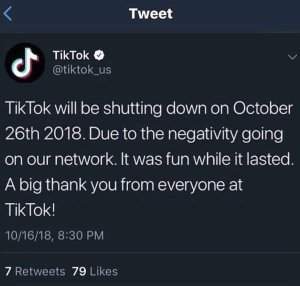 Is TikTok shutting down?

There is no trace of the above tweet on TikTok’s Twitter page, which likely suggests that the above image is doctored.

The company appeared to confirm as much yesterday, sending a tweet that simply read “#FakeNews”, as rumours began to circulate.

TikTok also posted a message reading “10/26/18. 8am PST”, suggesting that some sort of announcement is coming this afternoon (4pm London time). However, the tweet has since been deleted.

TikTok: The world’s most valuable startup

The company has yet to make an official comment on the rumours. However, it seems very unlikely that TikTok will shut its services, given that Bytedance, the app’s parent company, just became the world’s most valuable startup.

Like many startups, Bytedance has yet to turn a profit. However, the success of TikTok, and the huge financial potential that a successful social media platform offers, has helped to make Bytedance more valuable than US taxi-hailing app Uber. It’s growth outside of China in 2018 will have also helped to attract investment.

According to Bloomberg, a new investment round has given the company a value of $75bn. Uber’s last valuation was for $72bn. While an Uber IPO would likely value the company above the $100bn mark, for the time being Bytedance sits ahead.

Also included in the Bytedance portfolio is the Toutiao news aggregator, which uses artificial intelligence to aggregate and recommend news stories to its users.

The investment round, led by Japanese conglomerate SoftBank, reportedly raised $3bn. Investment firms KKR & Co. and General Atlantic were also involved in the round.

The company hopes to use the money raised to speed up its global expansion plans and cement its place as the leading platform for music video creation and sharing. While it may seem like a niche area, TikTok could soon face competition from Facebook, as the US tech giant looks to muscle in on Bytedance’s space.

According to reports, Facebook is creating a new app to rival TikTok, which will allow users to record themselves lip-syncing and dancing along to music.

Facebook already has a similar feature in its own app. Lip Sync Live allows users to sing along to music while streaming live to their friends and followers on the Facebook platform. However, Mark Zuckerberg’s social network has had difficulty attracting and retaining younger users. Like its Instagram photo-sharing app, a standalone app aimed at a younger audience could offer a potential solution.

Known as Lasso, a TechCrunch source said described the app as “basically TikTok/Musically [a similar app recently purchased and absorbed by Bytedance]”.

“It’s full-screen, built for teens, fun and funny, and focused on creation.”