Alien-like yet ethereal, jellyfish hold remarkable promise for research, but catching them without causing harm remains a challenge. However, a soft robot designed to catch jellyfish and other soft marine creatures safely could prove a game-changer.

Developed by scientists at Harvard’s Wyss Institute for Biologically Inspired Engineering, the soft robot bears a notable resemblance to the creatures it is designed to catch. Featuring six flat silicone ‘fingers’ attached to a 3D-printed plastic ‘palm’, the robot is designed to grip jellyfish with an extremely light touch.

This represents a significant step up from current solutions, which are adapted from robots used in the oil and gas industries and so are comparatively clumsy and heavy handed. Even the most advanced jellyfish catching grippers currently available exert pressure of around 1 kilopascal (kPA), but this robot can catch jellyfish using just 0.0455kPA of pressure.

This means that while current grippers risk injuring or even killing the jellyfish, the soft robot cannot harm the creatures it is trying to collect. This also makes it useful not only for collection, but as a safe tool for studying such creatures within the ocean.

“Our ultra-gentle gripper is a clear improvement over existing deep-sea sampling devices for jellies and other soft-bodied creatures that are otherwise nearly impossible to collect intact,” said study first author Nina Sinatra, former Wyss Institute graduate student and now a mechanical and materials engineer at Google.

“This technology can also be extended to improve underwater analysis techniques and allow extensive study of the ecological and genetic features of marine organisms without taking them out of the water.”

How the soft robot can safely catch jellyfish

The robot, which is detailed in a paper published today in the journal Science Robotics, is able to ensnare jellyfish without harm thanks to its highly novel design.

Each flat strip of silicon features a hollow channel, with a layer of polymer nanofibres fixed to one side. While still flexible, these nanofibres are stiffer than the surrounding silicon.

When each channel fills with water, the difference in stiffness between the two materials causes the ‘fingers’ to curl, collectively creating the gripping motion that enables the jellyfish to be captured.

The robot has already been successfully used to capture a selection of different jellyfish at the New England Aquarium, which showed no signs of stress or negative impacts from the process.

It is the latest in a number of soft robots developed at the Wyss Institute specifically for underwater sampling, with others used to capture creatures such as corals, squids, sponges and octopuses.

“Soft robotics is an ideal solution to long-standing problems like this one across a wide variety of fields, because it combines the programmability and robustness of traditional robots with unprecedented gentleness thanks to the flexible materials used,” said Rob Wood, who is the co-lead of the Wyss Institute’s Bioinspired Soft Robotics Platform and the Charles River Professor of Engineering and Applied Sciences at SEAS. 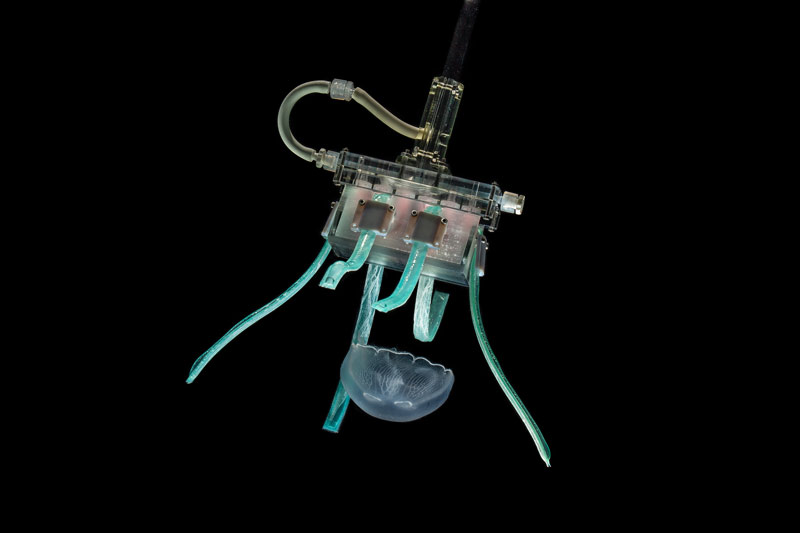 The soft robot in action.

In the case of this soft robot, the potential for research is significant. With a highly unusual genetic makeup, jellyfish genes have significant potential in a host of different fields.

In some cases, they have already produced real-world benefits. For example, they have resulted in the development of green fluorescent protein, which is now the go-to material to study gene expression.

They also have huge potential for future research, particularly in work relating to ending the ageing process.

However, for such work to advance, samples need to be collected safely, which makes the jellyfish-catching robot extremely valuable.

“Marine biologists have been waiting a long time for a tool that replicates the gentleness of human hands in interacting with delicate animals like jellyfish from inaccessible environments,” said study co-author David Gruber, a Professor of Biology and Environmental Science at Baruch College, CUNY.

“This gripper is part of an ever-growing soft robotic toolbox that promises to make underwater species collection easier and safer, which would greatly improve the pace and quality of research on animals that have been under-studied for hundreds of years, giving us a more complete picture of the complex ecosystems that make up our oceans.”

Read more: Self-healing rubber could be “game-changing” for soft robotics