London Cocktail Festival has been going on all week. It’s been attracting the best of the best in cocktails from London and beyond. From London gins to Japanese craft sake, there’s something for everyone.

Verdict visited the Cocktail Village in the middle of Old Spitalfields Market to see what’s on offer. We tried plenty of cocktails in the name of finding the best things for you to taste!

So, without further ado, here’s your need to know guide to London Cocktail Week. The festival goes on until Sunday 8 October, so there’s still time for you to get a few rounds in!

London Cocktail Week: everything you need to know

Dozens of bars all over London are taking part in London Cocktail Week. They’re offering discounts, masterclasses, and plenty of fun activities to celebrate. You can find the full list here. They’ve even broken it down into areas, so you can find the best places near you.

The central hub of the festival is the Cocktail Village at Old Spitalfields Market. The address is 16 Horner Square, London E1 6EW.

Can I buy tickets?

As we mentioned before, we were lucky enough to drop by the Cocktail Village and try a few samples ourselves! There’s plenty to see and do so we’ve put together a list of some of our personal favourites from the village, so you know which places to try first!

The full list of brand at the festival are as follows:

As you can see there’s a lot of brands at the festival. With that in mind, here’s our favourite experiences from the Cocktail Village.

We can’t really include KANPAI as an experience, because it didn’t really have a stall. Instead, you can find this London craft sake behind the bar at a few of the stands. If you’ve never tried it, sake is a traditional Japanese alcohol made from rice, water, yeast and koji. It’s very easy to drink. The founders of KANPAI learned to love the stuff while travelling in Japan and decided to make their own back in London. If you want to try something new, you should definitely seek it out! 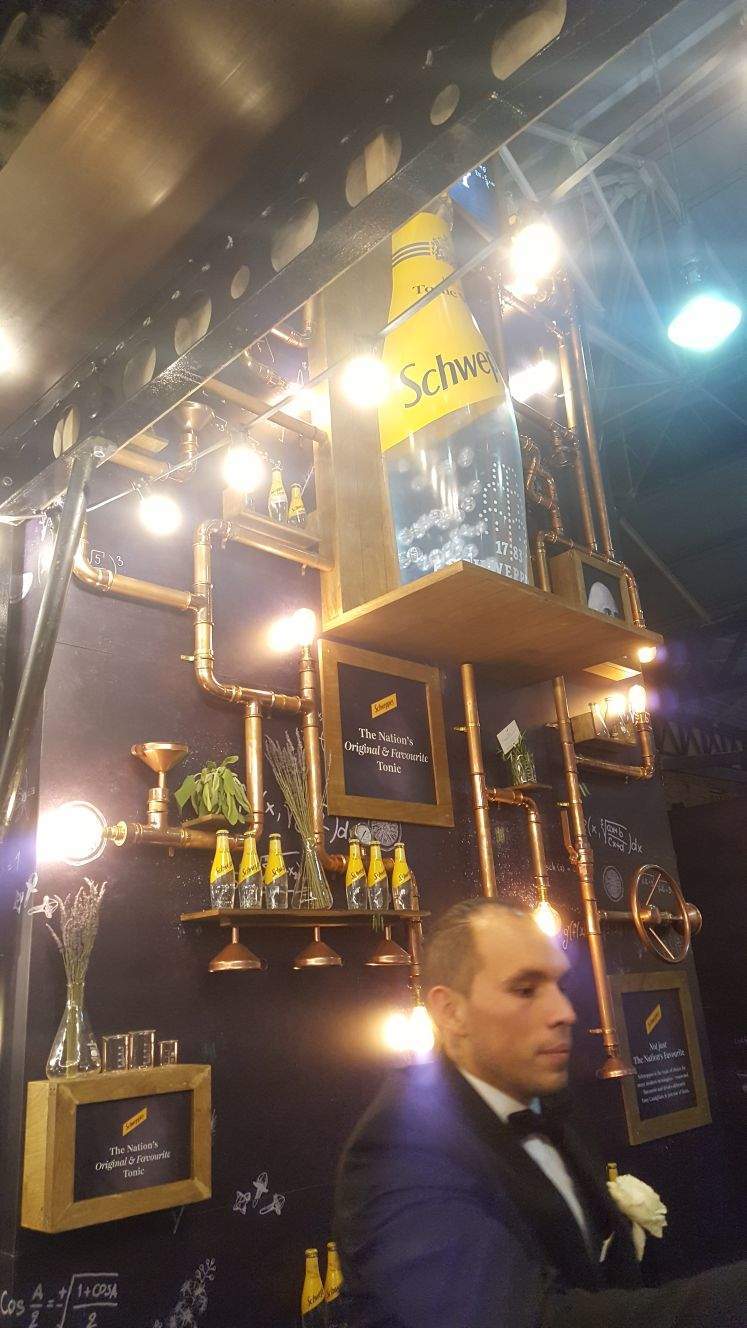 They might be the big name in lemonade, but Schweppes do cocktails too. They’re focusing on their own tonic water this time around, so expect lots of gin. This steampunk-style bar is filled with hidden drawers, taps, and things to fiddle with while you’re drinking. In addition, like the Apothecary Shop, you can expect things to smoke and bubble and fizz as you’re drinking them! Highly recommended, though we’d advise avoiding the ‘Hidden Gem’ – it isn’t nearly as cool as it sounds and was probably the worst cocktail we had all night.

This one is very cool. For £10 you can get a big helping of fried chicken and a delicious Southern Comfort cocktail to wash it down. Oddly, considering we’re talking about a cocktail festival, the chicken is the best part. How Southern Comfort have managed it in a small portable kitchen is anyone’s guess, but you won’t find a better portion of fried chicken this side of Kentucky. Their special signature drink for the festival is the Gambit, a light bittersweet Southern inspired aperitif – the Spirit of New Orleans in the body of a Sazerac. Even better, you can sit on the roof of their booth and look down at the festival below!

Okay, if you want an Instagrammable bar, look no further! G’Vine’s stand is contained within a giant copper distilling pot, surrounded by bubbling fountains of gin. Not bad. They’re serving gin in mini-watermelons for a really tropical feeling! Pretty cool considering it’s mid-October. 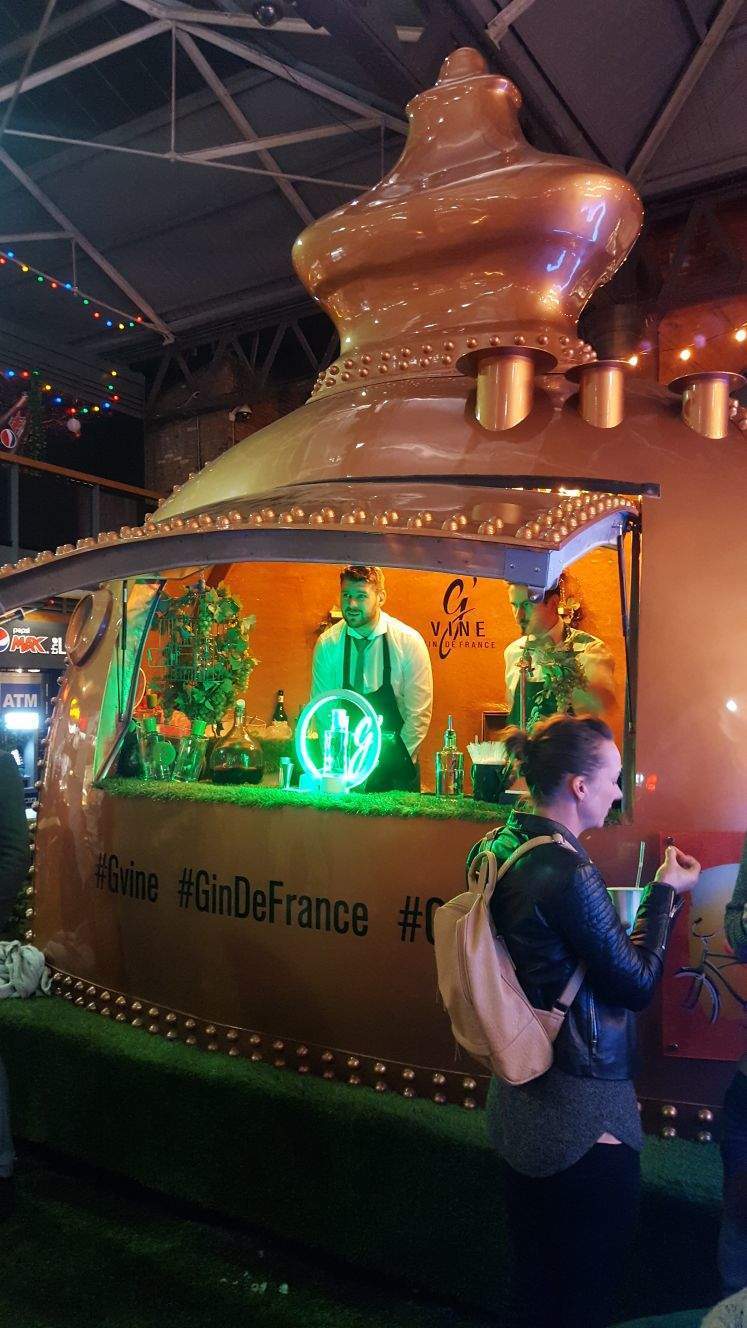 These ones don’t have a fancy bar name, but they’ve got a trick up their sleeve for attracting customers. You see, if you buy a cocktail from Funkin’, it’ll cost you £6. Not too bad, considering the standard prices for cocktails in London. But if you choose to shake your own cocktail for £8, you can take the shaker home with you as a commemorative gift! It helps that the drinks from Funkin’ Cocktails are absolutely delicious. We particularly enjoyed their Strawberry Dacquiri! A very tasty classic!

One thing you can’t fail to notice as you walk around the Cocktail Village is all the scientists. Well, you might think they’re scientists to begin with. Because there are a lot of people carrying around test tubes and smoking beakers. So what gives? Well, the Apothecary Shop by Monin are doing some incredibly cool serves that bubble, fizz, and pour with smoke. Try the Nitro Popcorn Espresso. It’s exactly what it sounds like but it’ll also smoke while you drink it. Very cool.

Another very cool little stall selling very cool little drinks in very cool little bottles. In short, Cointreau are very cool. Their booth is a giant bottle of Cointreau, you know that iconic square-based bottle? Well they’re vending out of a massive one of those. And the cocktails they’re serving come in little Cointreau bottles of their own, complete with paper straws. It’s very cutesy but you can’t beat a Cointreau cocktail.

You wouldn’t dream of having a gin without a tonic, and Fever Tree have developed a reputation as the best in the tonics business. But they’re also branching out into new areas! Did you know they do ginger beer and cola too? At one of the Cocktail Village’s more exclusive venues, you can try Fever Tree’s ‘dark serves’. Their trailer bar features an upstairs area where you can sample their ginger beer and cola in rum and whisky cocktails, while gazing out at the village below (that’s where the cover photo for this article was taken from). Still, if you weren’t lucky enough to gain entry to the upstairs part, you can get the classic Fever Tree G&Ts from downstairs. Plus, there’s an opportunity to be entered into a draw to take part in Fever Tree’s own escape game. Think The Crystal Maze but with cocktails! 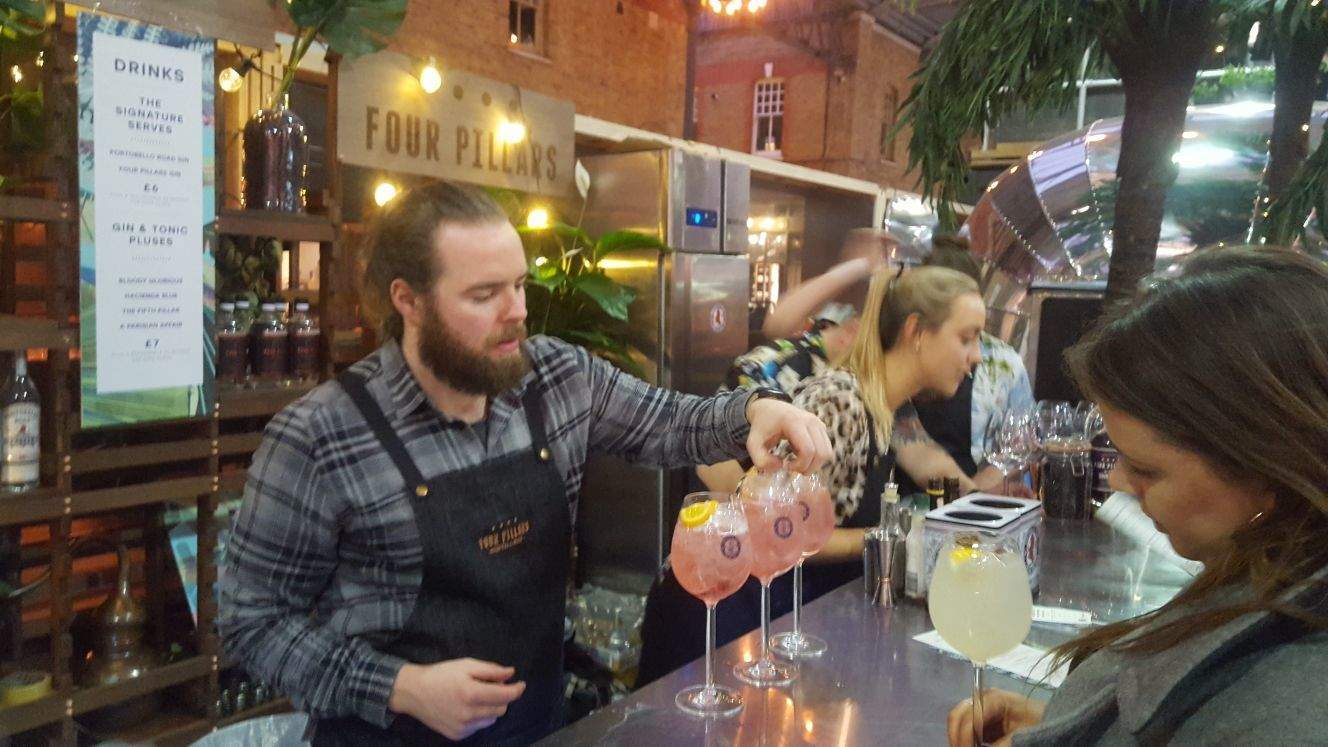 Who else could we end this list with than the best gin in all of London, Portobello Road? They’ve teamed up with small Australian distillery, Four Pillars to offer some classic G&Ts alongside some ‘Gin & Tonic Pluses’ that are more akin to classic cocktails. These people really are the masters at gin, and you won’t find a better serve in the entire Cocktail Village. We recommend trying Four Pillars’ ‘Bloody Glorious’, their signature Shiraz Gin, lemon bitters, mandarin liqueur, and Fever Tree’s Mediterranean Tonic. Or, if you want to show some London pride, Portobello Road Gin’s ‘A Parisian Affair’, combining Portobello Road Gin, Fever Tree’s Sicilian lemon tonic, and a dash of absinthe, comes highly recommended.