What has an iced tea maker and the cryptocurrency bitcoin got in common? Blockchain.

Long Blockchain Corp is a New York-based group, and according to the company, is “focused on developing and investing in globally scalable blockchain technology solutions” and is seeking to raise $8.4m in stock offerings to further this goal.

Just over a month ago the company was an iced tea producer called Long Island Iced Tea Corp that just struck a distribution deal for cold-pressed juice and has never reported a profit.

Shares in the company leaped last month following the announcement, though many have questioned whether investors knew exactly what they were buying into. 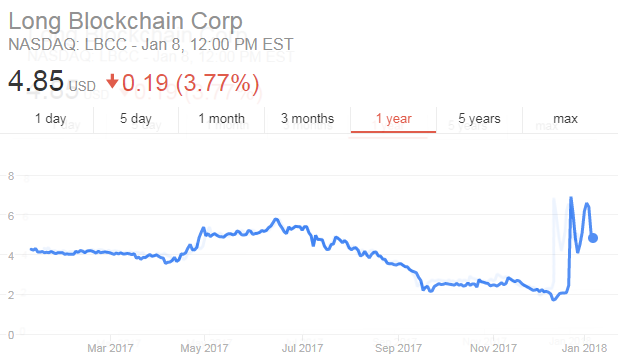 Despite the company continuing its flavoured iced tea operations under a subsidiary called Long Island Brand Beverages questions arise about whether a drinks business can successfully create “scalable blockchain technology solutions” or whether it’s using its new name to capitalise on the cryptocurrency craze?

The sudden rise in the price of bitcoin has created new interest in the blockchain technology behind the e-currency.

Blockchain is a decentralised ledger that tracks transactions in a secure way using cryptography to make modifications almost impossible.

The popularity of bitcoin has been fuelling a speculative bubble in the stock market as investors keep throwing money at any and all companies using blockchain in the hopes of finding the new Bitcoin unicorn.

Long Blockchain is the not the first company to radically alter its business model and strategy to cash in on blockchain.

For instance LongFin, a trade finance specialist, recently announced that it bought a blockchain-related venture and saw its stock market value increase by 1,000 percent.

But Long Blockchain is one of the strangest businesses to go into a blockchain venture because of its humble iced tea origins and decision to change its name to include blockchain.

This has echoes of the dot-com boom when companies added online to their names to grab investor attention, and money.

This raises concerns for regulators and investors about scams and whether cryptocurrencies, and blockchain more broadly, is in the midst of a bubble similar to the dot com boom of the late 1990’s.

Long Blockchain will have to be careful in its new hyper competitive, overheating, cryptocurrency market to survive the potential bubble.

Otherwise, it might need a drink to soothe its losses. Maybe a long island iced tea?