The Metro Bank share price rose this morning ahead of a high-stakes shareholder meeting where at least one top investor is planning to vote against the reappointment of the bank’s founding chairman, Vernon Hill.

Hill faces a shareholder revolt over £21 million in payments made to an architecture company owned by his wife and for a £120,000 travel allowance.

The rebellion was launched by British fund manager Royal London Asset Management, who said it plans to vote against Hill’s re-appointment at the bank’s annual shareholder meeting today. 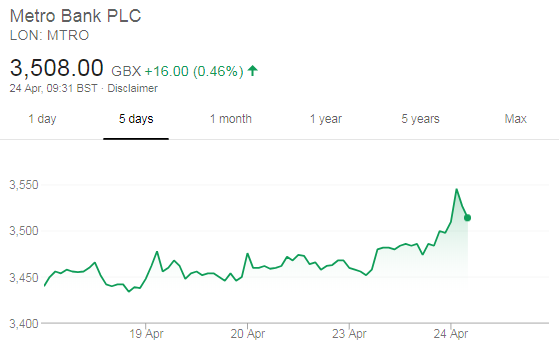 Royal London Asset Management, which owns a 0.44% stake in the bank, said it also plans to vote down the reappointment of audit committee chairman Stuart Bernau.

An audit showed that a total of £21 million was paid to InterArch by Metro Bank since 2010, for services that include architectural design services, branding, marketing, and advertising.

Ashley Hamilton Claxton, head of responsible investment at RLAM, questioned the relationship between the two firms in a statement, saying:

“We question whether Metro Bank’s audit committee has been sufficiently rigorous in its scrutiny of the payments made to InterArch.”

Metro Bank defended the payments in a statement, claiming they were made in the bank’s interest:

“The audit committee has strong review and benchmarking processes in place, conducted by authoritative independent third parties,” it said.

“We question the need for the company to engage in business relationships with its directors and their close relations.

“We view such relationships as potentially creating conflicts for directors, as they may be forced to weigh their own interests in relation to shareholder interests when making board decisions.”

In a report, The Sunday Telegraph said that Hill, who receives £10,000 a month for travel expenses, was often joined on a private jet by his wife and other InterArch employees.

The newspaper also claimed that employees from the architecture firm stayed in a Mayfair flat paid for with company funds, and used Metro Bank office space when in London.

Metro Bank’s Q1 financial results for 2018 are due on Wednesday morning.