Surveillance is on the increase around the world, but the extent to which citizens are under watchful eyes varies dramatically. And according to research on the most surveilled city in the world published this week, London is the worst city for prying eyes outside of China.

With a reputation for high levels of surveillance and having already embraced facial recognition technology in many parts of the country, it is perhaps no surprise that China dominates the top 20 cities for surveillance, accounting for eight of the top ten.

But according to the research by Comparitech, London is the worst city in Europe when it comes to surveillance via CCTV, and the sixth worst in the world, with around 40% more cameras per person than the Chinese capital Beijing.

The only other non-Chinese city in the top ten is the US city of Atlanta, Georgia, which came in tenth place.

The most surveilled city in the world

While the top 20 list for the most surveilled city in the world is overwhelmingly dominated by China, there are also cities from the UK, the US, UAE, Iraq, Russia, India, Singapore, Australia and Germany included.

This indicates that governments from across the political spectrum are seeing benefits in using surveillance, despite frequent concerns from citizens and special interest groups over the issue of privacy.

With CTTV cameras a common sight among the city’s urban fabric, many Londoners are familiar with the UK capital’s reputation for surveillance. However, its high position in the world rankings is still likely to surprise many.

So what has caused the city to embrace such high surveillance levels?

“Advocates for London’s use of CCTV and other forms of surveillance say it helps fight crime and terrorism,” Paul Bischoff, who led the research at Comparitech, told Verdict.

“They document faces, license plates, and other images in an attempt to track people’s movement across the city.”

However, while the motives may be positive, there is a lot for privacy advocates to be concerned about.

“The vast majority of people who pass in front of these cameras are not suspected of any wrongdoing, and yet their movements are being tracked,” said Bischoff.

“Although no one should have any expectation of privacy in a public space, we have until recently been able to at least remain anonymous in a private place.” 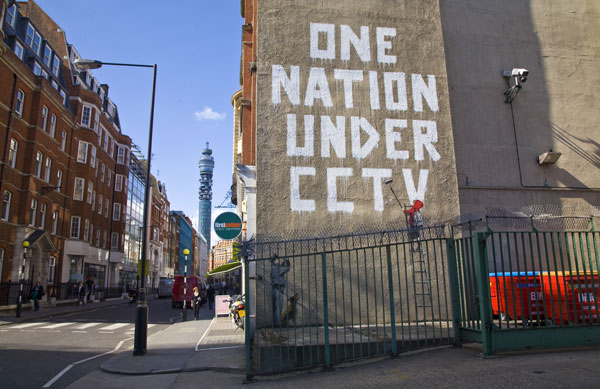 Graffiti by Banksy protesting the UK’s prolific use of surveillance in London.

While London is more closely surveilled than many Chinese cities, including its capital, China is undoubtedly the world leader when it comes to surveillance.

And this is not expected to change any time soon. According to Comparitech, China is expected to have one public CCTV for every two citizens by 2022.

But while London’s reason for high levels of surveillance is crime related, Bischoff argues that China’s reasons are more focused on population management.

“China uses CCTV surveillance to, among other things, enforce restrictions on freedom of movement. If someone’s social credit rating is too low, for example, they might be disallowed to use certain types of travel,” he said.

“Face recognition is used to identify and prevent such a person from getting on a train or plane. These are not people convicted or accused of crimes – they simply don’t meet the governments moral standards.

“This sort of CCTV face recognition surveillance is pervasive in places where China carries out human rights abuses like Xinjiang.”

With so many cities ramping up their levels of surveillance, it would be easy to assume surveillance is an approach with proven safety benefits.

However, the Comparitech research, which also looks at rates of crime, indicates that this is not the case.

“The assumption is that more cameras lead to a safer city, but our study shows little to no correlation between the number of cameras per capita and a city’s safety and crime indices,” he said, adding that they could provide operational benefits, such as traffic monitoring.

The rise in facial recognition in the UK

The issue of surveillance is now being further compounded by the growing use of facial recognition. While this is now relatively commonplace in China, other countries have until recently been reluctant to embrace the technology.

However, in the UK facial recognition is increasingly being used, with a report published today by Big Brother Watch finding that millions of people in the country have already been scanned by the technology.

According to the organisation, facial recognition has been used in some of the UK’s biggest shopping centres, including the Sheffield-based Meadowhall and the Trafford Centre in Manchester, as well as privately owned businesses, including betting shops and museums.

“There is an epidemic of facial recognition in the UK,” said Silkie Carlo, director of Big Brother Watch.

“The collusion between police and private companies in building these surveillance nets around popular spaces is deeply disturbing. Facial recognition is the perfect tool of oppression and the widespread use we’ve found indicates we’re facing a privacy emergency.

“We now know that many millions of innocent people will have had their faces scanned with this surveillance without knowing about it, whether by police or by private companies.”

Away from the privacy issues, there are also technological concerns.

“These camera systems are often connected through the internet, making them susceptible to hackers,” said Bischoff.

“Face recognition technology has a high error rate, so people’s faces can be erroneously matched with criminals’, while criminals might not be recognised at all.”

For those concerned about the levels of surveillance in their cities, however, there is unfortunately little that can be done to stop the issue.

“There’s very little regulation about how CCTV cameras and face recognition can be used. No one is required to obtain your consent before taking your photo and storing it. You can try wearing sunglasses or a hat to obscure the camera’s image, but it’s not guaranteed to work,” said Bischoff.