While bitcoin remains the dominant global cryptocurrency, a swathe of alternatives (known as alt-coins) have appeared over time; LiteCoin, ByteCoin, Ripple and even the meme inspired DogeCoin.

However, it appears that Ethereum is the rising star on the cryptocurrency scene, having surpassed Ripple in May to become the second-most valuable and sizeable cryptocurrency in 2017. 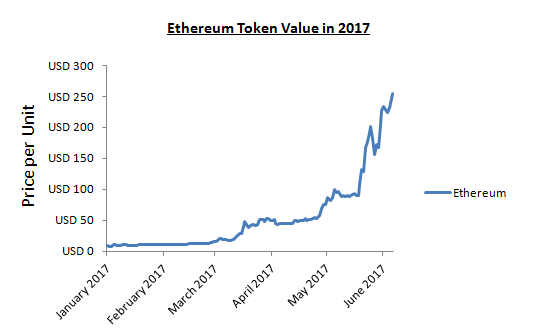 Whilst Bitcoin’s value remains extremely high, Ethereum’s value and market share are beginning to make headway and are positioned to challenge the leader in the medium to long term. 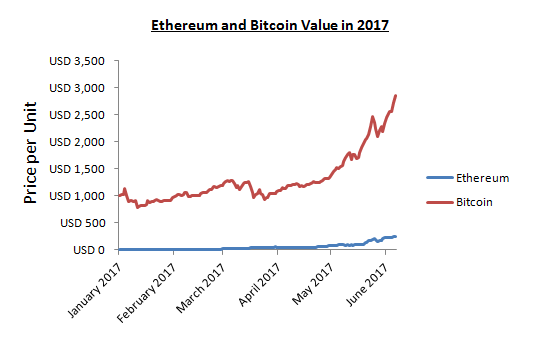 According to research by Coinmarketcap, bitcoin accounted for 87.2 percent of the digital currency market at the start of 2017, while Ethereum accounted for just 4.06 percent.

By 5 June, this had radically altered, with bitcoin falling to 45.26 percent and Ethereum surpassing Ripple to account for 23.88 percent of the market.

This impressive leap in share has been driven by the market noting interest from the Bank of America, Santander and JPMorgan’s in Ethereum-based blockchain applications.

While the price per bitcoin is still around 10 times that per Ethereum token, its market share is decreasing.

Price predictions can be perilous

Cryptocurreny is notoriously hard to forecast, and its fortunes often coincide with economic and political uncertainty, but if the market remains on this trajectory, the value of Ethereum could well surpass that of bitcoin by the end of 2018.

However, this relies heavily on banks’ continued endorsement and support for the cryptocurrency.

Beyond the bubble, the extra value of Ethereum lies in its continued adoption into the payments infrastructure of the banks’ clients’ businesses.