Nike chose Colin Kaepernick to be its poster boy for the 30th anniversary of the Just Do It campaign.

The marketing gamble, despite initial backlash, has worked in the company’s favour as the Nike share price closed at an all time high on 13 September 2018. 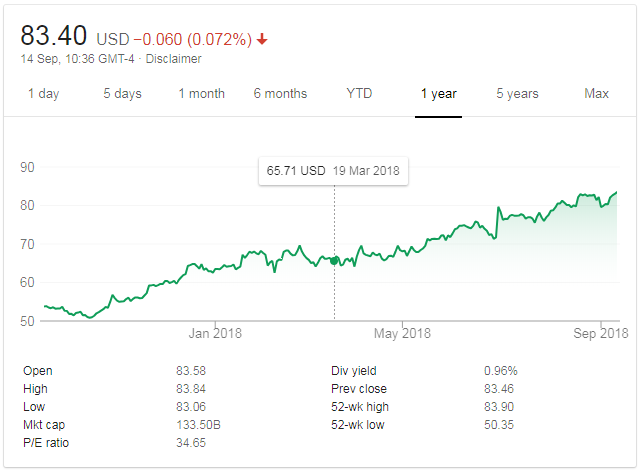 Kaepernick is a controversial figure in the United States. In 2016 he decided to sit-out and then kneel for the national anthem at NFL games in protest against police violence towards African-Americans.

The move prompted hundreds of players to do the same while drawing criticism from some commentators and NFL fans.

Kaepernick has not played professionally in the NFL since the end of the 2016 season.

When Nike initially announced it was using Kaepernick, the company’s stock price trembled amid fury from some US politicians and conservatives on social media.

However, the Nike share price has since bounced back. The likely cause of the raise in the past few days is no other than President Donald Trump, who tweeted about Nike’s decision on 7 September.

Why Nike needed this campaign to work?

Nike’s North American revenues struggled somewhat in the year ending May 2018, registering  a 2% decline. Overall Nike’s growth was 5% excluding exchange rates, powered by rapid international growth. The US market was marred by disruption to distribution, as several retailers went bankrupt.

Kaepernick’s protests are very much a fault line in intergenerational divides. A poll commissioned by CNN found that among people aged 18 to 34, 44% supported Nike’s decision to use Kaepernick, while 32% opposed it.

A survey commissioned by the MSL Group found that 69% of millennials want businesses to better facilitate customers getting involved in social issues.

Issues millennials are most concerned about include equal rights, the environment, and healthcare access.

Most notably, the millennial generation, now 44% minority, is the most diverse adult generation in American history.

Kaepernick’s protests regarding police brutality against people of colour will resonate with the experience of this demographic, and Nike will leverage Kaepernick’s activism for its brand.