Online grocer Ocado’s shares are down six percent this morning after it missed forecasts with flat full-year earnings for 2017.

It has warned its profits will take a hit as it channels investment into the technology side of the business. The company says it will spend around £210m on increasing capacity and further investments into its Ocado Solutions platform in 2018.

Despite this, Ocado is celebrating the success of its international expansions with its deals with the French supermarket Groupe Casino and Canadian retailer, Sobeys, which are using Ocado Solutions. 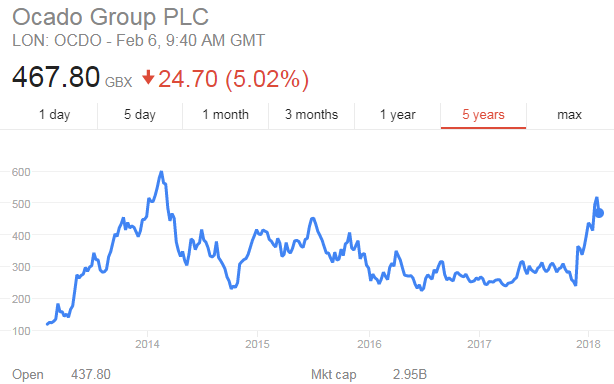 “The last twelve months have been transformational for Ocado. We have primed our Ocado Solutions business for growth and received an important validation of the business model through our latest partnerships with Groupe Casino and Sobeys.

“Looking ahead, we are confident that we will be able to do further deals with the momentum of new signings building over time.”

“The spike in costs is disappointing and indicates that Ocado could still be struggling to source labor after complaining of a shortage of drivers last year. That’s a growing pain and management’s ongoing investment in the business makes sense at this juncture.

“The bottom line is that the recent stellar share-price performance has all been about two partnership deals, with Groupe Casino in France and with Sobeys in Canada. The market will be hungry for more of these big scale boosters, especially with an 800-pound gorilla like Amazon breathing down Ocado’s neck.”

In recent years, the company has been attempting to pivot from its status as an online grocer into a full technology company providing solutions to other supermarkets.

The Groupe Casino deal last year was the first of its kind, followed by Sobeys. Ocado hopes to ink more of these deals this year.

In addition, Ocado has been investing in robotics to create solutions for grocery picking. It unveiled its new robotic arm, part of its highly automated warehouse in Andover, UK, last year.

The company prides itself on becoming the first UK grocer to develop and enable Alexa voice-activated capabilities, for Amazon’s Echo speaker. It says it wants to make grocery shopping even easier.

At the time, Steiner said:

“We are not perfect. We made some cock-ups. [And], we had to grow more slowly while we rectified them.”

The online grocery market is a difficult one and this is only increasing, with the introduction of players such as Amazon Fresh in recent years. However, Ocado has its sights set on moving more into technology and it appears that this is starting to pay off.