With Covid-19 continuing to disrupt economic priorities around the world, the UAE has stepped up its ambitions for the country’s food sector, around 80 per cent of which comprises imports, reports MEED.

In the first three months of 2020, the UAE imported more than 3.5 million tonnes of food items worth about AED13bn ($3.5bn), while its food exports totalled 918,000 tonnes, valued at AED3.7bn. The underlying significance of these figures was highlighted during the peak of the Covid-19 crisis in the second quarter of 2020, when border closures and travel restrictions led to severe disruption to global supply chains.

In May, during a series of high-level government meetings led by Sheikh Mohammed bin Rashid al-Maktoum, Vice President and Prime Minister of the UAE and Ruler of Dubai, the decision was taken to consider food security as a key sector requiring promotion in the post-pandemic era. Recent developments in Abu Dhabi and Dubai have also shown that projects in the food and agricultural sectors, unlike some in the traditional hospitality or retail industries, have the ability to attract interest, insights and investment from the private sector.It now looks likely that these schemes will gain greater budgetary priority over the years to come. 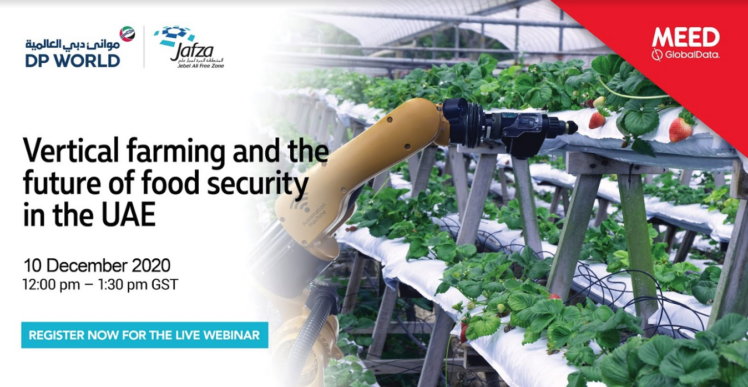 The UAE’s ambition to push farming, food security and agriculture technology (AgTech) is nothing new. Abu Dhabi’s Masdar City held its first international competition for vertical farming in 2009, with urban agriculture envisioned as an important component of its master plan.

This appetite for agricultural modernisation stems from the UAE’s geographic limitations. Arable land is in short supply, the climate is too hot, dusty and humid for open-field agriculture for much of the year, and large-scale traditional cultivation could severely drain national water resources. But overcoming these hurdles is necessary to contend with the realities of the local food sector, especially during a pandemic.

In April 2020, the Abu Dhabi Investment Office (Adio) committed AED367m ($100m) to four AgTech companies, including Madar Farms. The local startup is developing an indoor tomato farm using only LED lights in Khalifa Industrial Zone Abu Dhabi,and plans to ramp up the commercialisation of its microgreens.

The US’ Aerofarms, meanwhile, is working with Adio to develop an 8,200 square-metre research and development (R&amp;D) centre that will include a vertical farm and employ 60 engineers, horticulturists and scientists. Adio is also assisting US-based RDI, which is developing a plant-responsive irrigation system that reduces water usage, and the local fertiliser manufacturer RNZ.

Cash and non-cash incentives for the companies include rebates of up to 75 per cent on R&D expenditure upon the commercialisation of systems developed in Abu Dhabi. In June, Adio and the Abu Dhabi Agriculture &amp; Food Safety Authority also confirmed five food security projects worth AED75m. These included a contract with Agthia Group for a farm to research and improve forage products, as well as agreements with Al-Suwaidi and Al-Ghurair Group for a sheep and goat milk processing plant and a vertical farm to grow leafy vegetables in Al-Khatm.

In Dubai, a great deal of progress has been made since the GCC’s first vertical farm was opened by the local Badia Farms in March 2018. The startup’s second 4,645 sq m Dubai Industrial City farm, due to open this year, will also use hydroponics (a way to grow plants in a water-based and nutrient-rich solution without soil) to produce 3,500 kilograms of produce.

Meanwhile, a 1.2-hectare indoor vertical farm – touted as the world’s largest facility of its kind – is planned for land near Al-Maktoum International airport. Emirates Flight Catering (EKFC) and California-based Crop One formed a joint venture in 2018 tolaunch the AED147m project, which will have a production output equivalent to 364.2 hectares and the ability to harvest 2,700 kilograms of leafy greens a day, using 99 per cent less water than outdoor fields.

Also in 2018, in July, the UAE’s Ministry of Climate Change & Environment signed an agreement with Shalimar Biotech Industries to establish 12 vertical farms on 7,600 sq m of land owned by the ministry in Dubai.The city’s Jebel Ali area is home to the country’s first inland salmon farming facility. Fish Farm was set up in 2013 with assistance from Sheikh Hamdan bin Mohammed bin Rashid al-Maktoum, the Crown Prince of Dubai. The company rears some 3,000 tonnes of organic, homegrown fish a year, and has 34 tanks at its facility in Jebel Ali port, of which four contain salmon.

Hydroponic farms in the UAE are also becoming leaner and more agile. In April, local developer Majid al-Futtaim claimed it had opened Dubai’s first in-store hydroponic farm at its Carrefour store in Al-Wasl after rolling out similar facilities at itsCarrefour stores in Abu Dhabi’s My City Centre Masdar and Yas Mall. Covering 24 sq m, the Al-Wasl indoor farm can harvest up to 16 varieties of leafy greens and herbs.

The UAE’s food security and agricultural goals are based on an awareness of their costs and benefits over the long term. “Food is a strategic commodity and we look to young Emiratis to propose new ideas and projects to help further enhance food production,” said Sheikh Mohammed in June. “We have a clear strategy and sufficient resources to achieve our objectives, and we are confident that we can generate practical solutions to achieve self-sufficiency.”