Patreon’s platform enables creators to receive payments and financial support from fans, whilst also taking a 5% to 12% cut from their earnings.

It achieved a $4bn valuation in early April on the back of a $155m funding round. The Patreon founders said that the investment would enable the company to better help creators connect with fans. The unicorn is not profitable yet.

shesaid.so is a global community of women and gender minorities in the music industry.

Patreon and shesaid.so will, as part of the deal, co-present the Alternative Power 100 Music List 2021, which aims to challenge conventional notions of music and artists.

They will also co-host a series of virtual and physical events throughout the year to extend the conversation around how creators can more easily tap into the digital economy.

“We’re thrilled to be partnering with shesaid.so, an organisation that, like Patreon, believes in the value of independent creators and the need to create a world where they can fully thrive,” said Verena Grosssteinbeck, head of marketing Europe at Patreon.

“We recognise the daily realities and challenges of our creator community around the world and this partnership demonstrates that they are seen and heard and, most importantly, that we understand them. Ultimately, we want to give those who are under-represented a vital voice in the music business.”

Andreea Magdalina, founder of shesaid.so, added: “We want to continue our globally recognised work in empowering those in the music industry and creating a more equitable future. Patreon is a perfect partner for the #AltList and we’re looking forward to working closely together on a number of events where we can explore how to make the new creative economy successful for all at a time when it’s needed most.”

During the conversation, they argued that the ongoing non-fungible token (NFT) craze could create a new way for artists to cash in on their creations, without having to give away too much equity to big labels and production companies.

“NFTs are creating the sense of scarcity again and that’s where people are sort of seeing real value and real uniqueness,” Yam argued. “And it’s interesting to see how there are a lot of artists now trying to leverage that and create this sense of ‘there’s only one of these.’ And that’s why it’s so important.”

They are not the only one betting on NFTs to give creators a power boost.

When payment platform Square bought music streaming startup TIDAL in March, some speculated that it could lead to the introduction of NFTs on the platform.

This wouldn’t be surprising given Square CEO Jack Dorsey’s enthusiasm for cryptocurrencies and TIDAL’s mission to give back control to artists. No such announcement has been made so far, however.

Before raising its $155m venture round in April, Patreon had most recently picked up a $90m Series E round in 2020, according to GlobalData’s Technology Intelligence Centre and shown in below dataset. 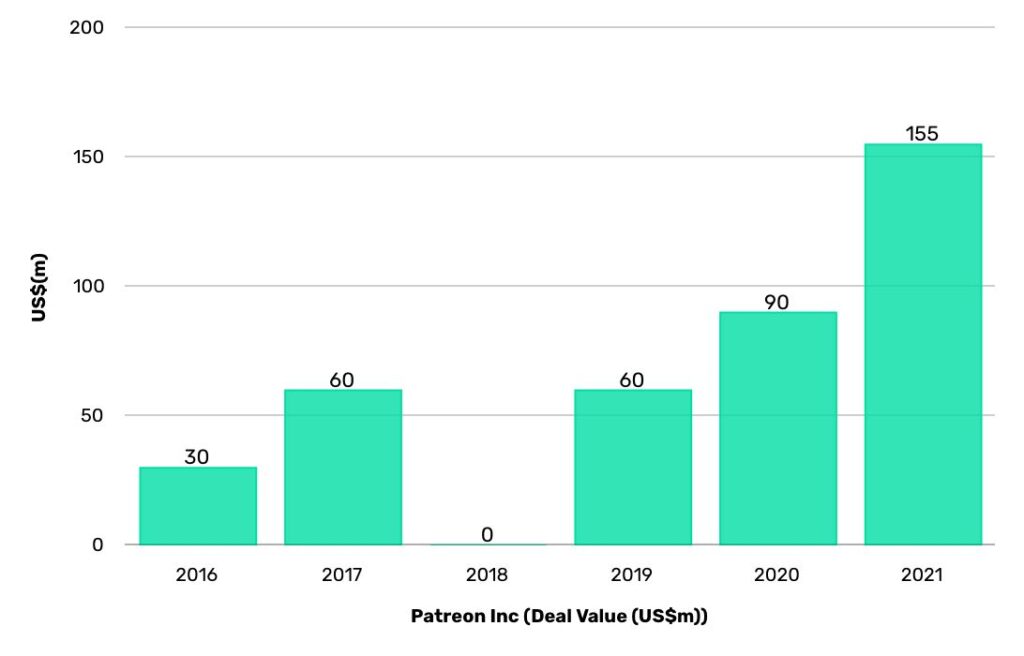