The company missed both earnings per share and revenue expectations, prompting a sell-off.

Philips share price dropped to its lowest in nine months, after shares plunged in February 2018, and closed at  €31.40 yesterday on 23 October. 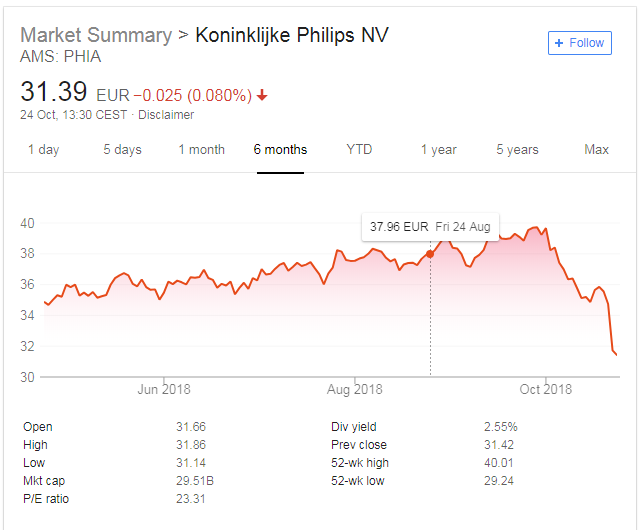 CEO Frans van Houten had blamed issues with the worldwide economy, citing “currency headwinds, which were sizeable in the emerging markets”, for the reason why profits weren’t as high as expected.

The company has managed to improve its cost position significantly. There was an increase in gross margin to 46.8% from January to September 2018, compared to 46% in the same period in the previous year. Adjusted EBITA represented 11.1% of sales for the year-to-date, compared to 10.2% in the same year previous.

CEO van Houten predicted that the brewing trade war between the US and China could cost the company around €60m  in profit next year.  The company is reevaluating its targets in Turkey and Argentina, where local currencies have experienced volatility.

The uncertainty between the UK’s exit from the European Union also poses a threat to the company’s profits, with a move away from its British manufacturing facility looking likely if the EU imposes strong export tariffs on the UK.

The company reduced its consumer products footprint significantly in the advent of fierce competition, and has instead prioritised high end medical equipment. MarketLine data estimates that global healthcare equipment and supplies will grow with an anticipated compound annual growth rate of 4.9% between 2017 and 2022, primarily driven by Asia-Pacific.

CEO van Houten reiterated that the company was on track for four to six percent growth by the end of the year. For a company that is very clearly focusing its growth on the emerging markets, Philips would do well to achieve that growth figure. The company wants to innovate and earn a significant market share in the likes of China.