Last week at the World Economic Forum (WEF) in Davos thirteen company bosses thrashed out the details of a new green power initiative.

The Hydrogen Council, headed by heavyweights Honda, Hyundai, and Royal Dutch Shell, is preparing to sell hydrogen as a key part of the world’s climate change strategy.

Members of the Hydrogen Council in Davos last week

Combined members of the Hydrogen Council collectively represent total revenues of $1.1trn and 1.72m employees around the world.

The ambition is backed by a commitment to invest huge sums in the development and commercialisation of hydrogen fuels cells — Hydrogen Council members plan to invest just over $2bn a year in hydrogen technology over the next five years.

The council has released a report titled How hydrogen empowers the energy transition in an attempt to back up its ambitious promises, with a warning that “the need for action is pressing”.

Benoît Potier, chief executive of industrial gas supplier Air Liquide — who sits on the council — said at the launch: “Our call today to world leaders is to commit to hydrogen. 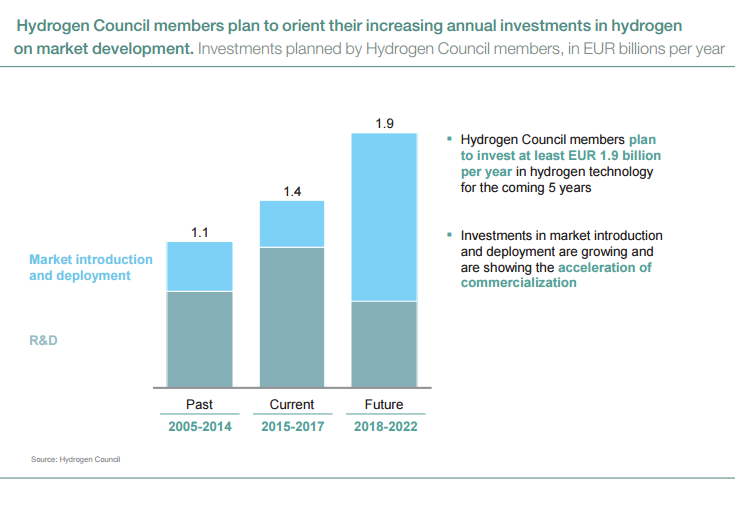 “The 2015 Paris Agreement to combat climate change is a significant step in the right direction but requires business action to be taken to make such a pledge a reality. Together we can meet our shared climate ambitions and give further traction to the emerging hydrogen ecosystem.”

This support stems from the greener qualities of hydrogen fuel cells, which combine hydrogen and oxygen to produce electricity and emit water vapour, warm air, and some hydrogen — proving to be less harmful to the environment than other fuels.

How is hydrogen being used today?

Some in the transport sector are beginning to take advantage of this.

Rail is seen by many as one of the cleanest forms of travel, but rail supplier and council member Alstom is trying to go one step further with its zero-emission train, the Coradia iLint.

The iLint, which uses a fuel cell, could have a 497-mile range and top speed of 87 miles-per-hour.

Henri Poupart-Lafarge, Alstom’s chief exec, called it a “breakthrough innovation in the field of clean transportation” during its launch at last year’s InnoTrans trade show in Berlin.

The cruise line Royal Caribbean made headlines in October when it announced it would use hydrogen as a means of additional power on its new Icon-class vessels, which are expected to be delivered in 2022 and 2024.

For the automotive sector, the Hyundai ix35, Honda Clarity FCV, and the Toyota Mirai all use hydrogen fuel cells, but electric cars powered by batteries have stolen much of the limelight in recent times – pushed on by the likes of Elon Musk’s Tesla.

However, those at Davos are convinced that hydrogen has an integral role to play.

Chief exec Alexandre Closset said hydrogen “could be a feasible technology to, at some point, replace diesel fuel in the shipping industry”.

The plans of the Hydrogen Council are nothing if not bold and ambitious.

The market capitalisation of the companies involved in the Hydrogen Council