Macron and Le Pen disagree on almost everything — EU membership, relations with Russia, how to contain terrorism and how to improve France’s stagnant economy. 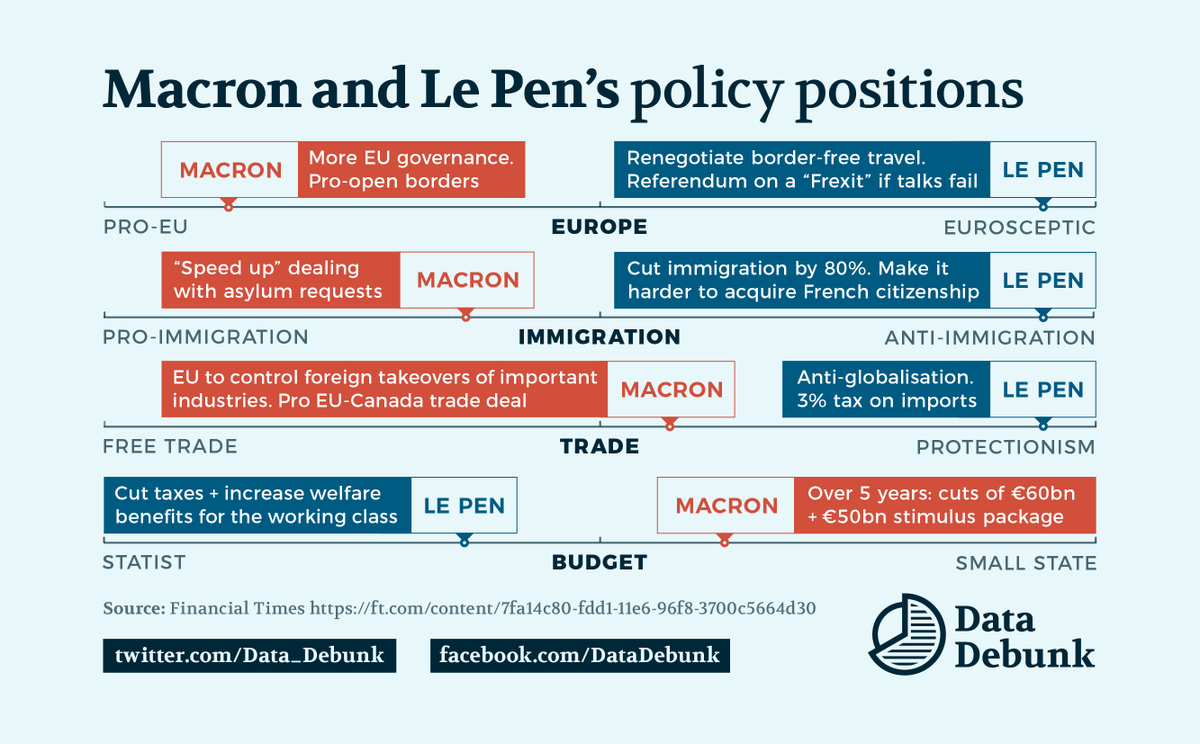 But how did the debate go down on social media?

Some views from the British public

Peter Timmins, who describes himself as a “blissfully retired European” decided to give some advice to British prime minister Theresa May by applauding the way the French candidates debated with each other.

May, had you tuned into French TV you could have watched politicians debate openly. You on the other hand just hide like a frightened puppy

Harry Leslie Smith, who boasts over 90,000 followers on Twitter, also compared the UK to France, attacking May for refusing to engage in real debate.

At least France gets a debate b/c here Theresa May has so little respect for voters she just won’t debate. #2017LeDebat #GE2017

David Head, who describes himself as “allergic to xenophobia, tribal nationalism & UKIP” makes the same observation.

You have to envy/admire the French: a two-hour (!) debate between Presidential rivals. In UK, PM & Corbyn hiding behind the sofa. #GE2017

Laurie Ryder from Gloucester in southwest England tweeted that she is surprised Macron is popular in Paris, despite his pro-immigration policies.

A 21-year-old who studies at Royal Holloway in London and is co-president of the university’s EU students’ society tweeted that she was disappointed by the tone of the debate.

Such a dark painting of France tonight… #shame #2017LeDebat

Some views from the American public

Matthew Yglesias, who lives in Washington criticised Macron’s elitism. His tweet has already been liked over a thousand times.

Macron’s decision to debate in French makes him seem pretty elitist. No way that’ll play in the Rust Belt.

What are journalists saying?

Dave Weigel who covers politics for The Washington Post and has over 300,000 followers on Twitter tweeted that history will repeat itself — a Le Pen victory is unlikely.

Malkah Nobigrot is a broadcaster who works for one of Mexico’s popular news channels Efekto TV. She observed the passion of both candidates in her tweet.

Le Pen came across as calm and presidential during the debate. Macron looked more like a angry kid to be honest.

Katie Hopkins, who appeared on The Apprentice in 2007 and now writes for the Mail Online and presents on LBC was also critical of Macron.

Macron gets 2 mins to talk to the French people direct. 10 seconds in and I’m bored out of my tree #Debat2017

Others took a different view.

Pierre Briançon, a 64-year-old senior correspondent for Politico noted Le Pen’s descent into shouting towards the end of the debate.

Le Pen shouting at Macron looks in total meltdown now. Thankfully only 4 minutes of this left. 2 mn each.

Andrew Neil, BBC presenter and the former editor of The Sunday Times tweeted that Le Pen’s comments relating to war in Algeria played into Macron’s hands.

Le Pen attacks Macron for claiming France committed crimes against humanity in Algeria. History pretty much on Macron’s side on this one.

Peter Allen, a journalist and author based in Paris tweeted that he agrees with Macron’s criticism of Le Pen’s understanding of economics.

Hard to disagree with Macron’s damning premise that Le Pen knows absolutely nothing about economics. #Debat2017

The editorial director and columnist for Le Monde, the popular French daily newspaper, Sylvie Kauffmann noted Le Pen’s failure to clearly outline her own policies for the country at the beginning of the debate.

For the first 18 minutes, Le Pen has been on the attack against Macron, without putting forward any of her propositions #2017LeDebat

Rather than focusing on either candidate, the Paris bureau chief for The Guardian pointed out that the environment was not mentioned during the debate.

2.5 hours of debate. No proper questions on the environment #2017LeDebat

The deputy global news editor of Buzzfeed, Ryan Broderick decided that neither Le Pen nor Macron emerged as the clear winner of the debate.

Alright. It’s over. That was insanely stressful. There was a lot of yelling. I think this lady won. #2017LeDébat pic.twitter.com/JsMA4qDnhf

How about people involved in research, policy-making and academia?

Michiel van Hulten, a 48-year-old former Dutch politician who is now an independent consultant and a visiting senior fellow at the London School of Economics (LSE) applauded Macron’s performance.

Macron takes Le Pen seriously every step of the way. Slaps down her lies, and then quietly outguns her with facts and figures. #LeGrandDebat

Unlike Macron’s use of facts and figures, Le Pen talked “nonsense,” according to Timothy Garton Ash, a historian and professor of European studies at Oxford University.

Camille Bullot also tweeted her support for Macron. She is the director of operations and engagement at the European Patients’ Forum, a public health organisation working across Europe.

Even during their #carteblanche, Marine LePen just comments on what Macron said #2017LeDébat – Macron wins this debate a million times.

Cecile Alduy, a professor of French literature at Stanford University said that there were stark differences between the way Le Pen and Macron handled the debate.