Rolls-Royce shares have climbed today after the company announced it was selling its German diesel parts maker L’Orange to US-based engineering company Woodward for £610 million.

Shares on the FTSE 100 blue-chip index climbed 2.2% following the announcement before slightly falling back. 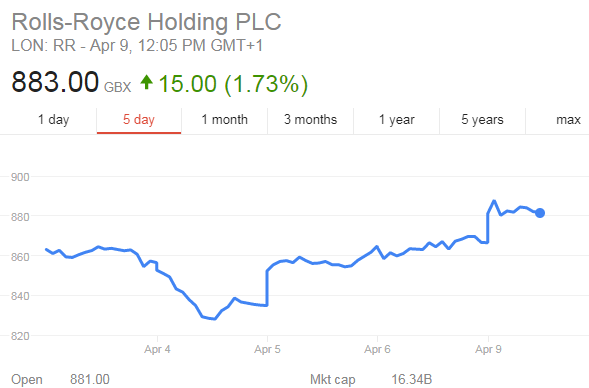 The decision forms part of Rolls-Royce’s plans to streamline its business, as demand for diesel falls.

Speculation that Rolls-Royce might sell the business began three months ago when it said it was “reviewing strategic options” for L’Orange after a string of profit warnings.

The deal, expected to close by the end of the second quarter of 2018, marks Roll-Royce’s biggest divestment since chief executive Warren East took over in 2015.

East said that shedding L’Orange — a subsidiary of Rolls-Royce’s power system’s arm — would help “improve the resilience” of the balance sheet and shore up extra capital “to pursue opportunities that will drive greater returns”.

This transaction builds on the actions we have taken over the last two years to simplify our business.

The divestiture of L’Orange enables Rolls-Royce power systems to focus on other long-term, high growth opportunities and our company to allocate our capital to core technologies and businesses that drive greater returns for the group.

CEO of Rolls-Royce power systems, Andreas Schell, said that L’Orange would continue to supply Rolls-Royce under a 15-year agreement:

Rolls-Royce, which makes engines for the aircraft, ships, trains and heavy-duty trucks, also plans to shed its loss-making commercial marine business after carrying out a review of the unit, it was reported by Reuters.

L’Orange has approximately 1,000 employees in Germany, the US and China, with the majority based at the company headquarters Stuttgart.