Sainsbury’s and Asda, two of the UK’s biggest supermarkets, have confirmed their plans to merge, following media reports over the weekend — sending Sainsbury’s share price higher.

The stock market this morning signalled its approval of the deal — the Sainsbury’s share price jumped by almost 20% at the London market open before paring gains slightly. 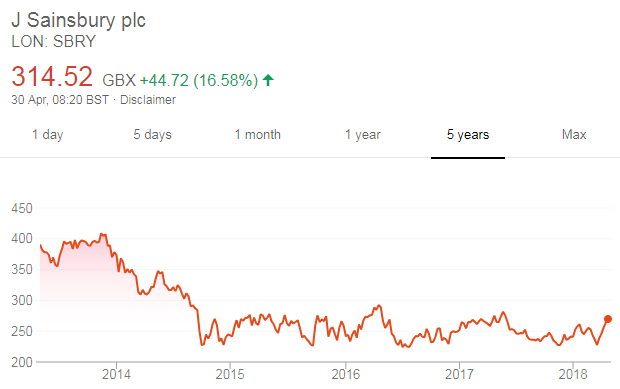 The combination of Britain’s second (Sainsbury’s) and third-largest (Asda) supermarket chains would create a new grocery superpower more powerful than Tesco, which is the current market leader.

The new supermarket group will aim to make £500 million in cost savings and is predicted to have combined revenues of £51 billion. It is thought that it will receive nearly £1 from every £3 spent on groceries in the UK high street.

There have been calls for the merger to be investigated by the competition watchdog over fears that it will impact consumer choice.

Sainsbury’s has valued Asda at approximately £7.3 billion on a debt-free, cash-free and pension-free basis, according to information posted to Sainsbury’s to the London Stock Exchange. Both firms have agreed to the deal.

Walmart, the US retail giant which owns Asda, is set to receive £2.975 billion in cash from the deal and will hold 42% of the issued share capital from the combined business. It will not, however, hold more than 29.9% of total voting rights.

Read more: Where the combined Sainsbury’s and Asda will sit in the UK groceries market

The combined business will be eyeing significant market share beyond groceries.

Sainsbury’s already owns the catalogue retailer Argos while Asda’s clothing line George competes with Marks & Spencer and Primark for the highest volume of clothing sales on the high street.

Sainsbury’s and Asda currently have a combined workforce of 360,000 people. Unions had warned that the merger had “implications for tens of thousands of jobs” but today’s statement said that there would be no store closures. If no jobs are lost, the new group will overtake Tesco as the UK’s largest private sector employer.

Sainsbury’s also released its results this morning for the financial year to 10 March 2018. The company had a 1.4% increase in pre-tax profit to £589 million and a 9% rise in group sales to £31.8 billion.

We have accelerated the rate of change and innovation across the group and more customers are choosing to shop with us than ever before as a result. I am pleased to announce an increase in underlying profits before tax to £589 million, driven by delivery of Argos synergies, efficiency savings across the group and improving food margin trends.

We continue to find ways to simplify our business and reduce costs. We have exceeded our original three year £500 million target and delivered a total of £540 million in savings. In addition, we will deliver at least £500 million of cost savings over the next three years to 2020/21. Net debt has reduced by £113 million to £1,364 million and we are targeting to reduce net debt by a further £100 million in 2018/19. I am optimistic about the year ahead.