Shares in Spanish bank Banco Santander dipped at the London opening this morning after the bank posted a 10% rise in first quarter profits.

In the first three months of 2018, Europe’s biggest bank by market capitalisation made a net profit of €2.05 billion, beating the €2.02 billion target set by analysts at Reuters. 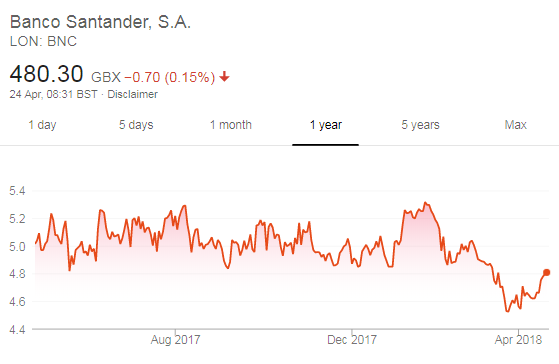 The double digit growth was buoyed by Brazil, Spain and Mexico and improved performance in the US, the bank said.

The gains came on the back of an improved performance in its main profit-making market Brazil, where profits climbed 27% to €677 million.

Total net profits excluding currency fluctuations were up 22% year-on-year, with total revenues in the quarter inching up 1% to €12.2 billion.

In the UK the bank’s performance continued to suffer, with profits sagging 21% to €320 million.

The Madrid-based lender blamed the poor performance on “an environment with some Brexit uncertainties and ongoing competitive pressures”.

Results in US profits rebounded 52% year-on-year to €125 million, in what they said was “largely due to higher gains on financial transactions, lower provisions and cost control, which offset the decline in gross income”.

The bank which has operations across Europe and America acquired their struggling rival Banco Populaire for €1 last year.

2018 has started well, with the Group generating double digit profit growth driven by strong results in Brazil, Spain and Mexico and improved performance in the US.

In the quarter, profit, profitability and capital all increased. We are well on track to meet our objectives for the year.