Saudi Arabia’s listing of a 5% stake in state-owned oil giant Saudi Aramco has been pushed back until 2019, according to British officials involved with the stock listing, the Financial Times has reported.

Officials in Riyadh planned for the listing of the world’s biggest initial public offering to go live in the fourth quarter of this year but have struggled to obtain the $2 trillion valuation sought by the country’s Crown Prince, Mohammed bin Salman.

Stock exchanges in London, New York and Hong Kong are all vying for the listing, with no indication yet as to which city is likely to win the prize.

Fears that company officials would be exposed “to lawsuits from shareholders and 9/11 victims”, has led to speculation the company will steer clear from the New York Stock Exchange, the Wall Street Journal reported.

A listing both on the local Saudi Bourse Tadawul and a foreign stock market is expected to take place at the same time, in the first or second quarter of 2019, the FT said.

According to former diplomat and regional consultant, Charles Kestenbaum, the listing will primarily be on the Saudi bourse, with a partial listing elsewhere.

The Aramco listing will be primarily on the Saudi Bourse, as the NY Stock Exchange is too complex and problematic for the Aramco listing. It is likely to be some sort of NYSE “presence” but not primary. 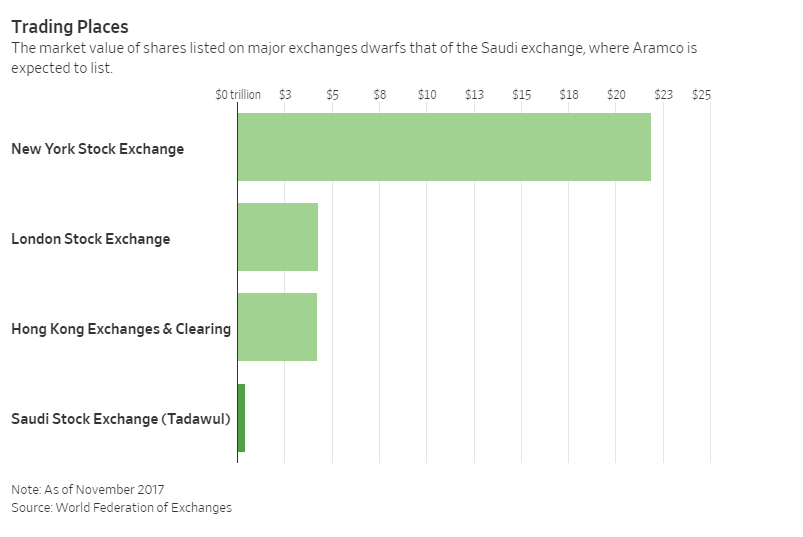 The money raised from the listing will help the Kingdom bankroll their ambitious so-called Vision 2030 economic diversification programme, intended to steer the country’s economy away from energy revenues in the age of cheap oil.

A $500 billion mega city and economic free-zone built off the Red Sea coast, Neom is just one of the crown prince’s pie in the sky plans to transform the Arabian peninsula into a booming trade and investment hub.

Saudi Arabia unveiled its Vision 2030 plan in June 2016, to overhaul their economy as global energy prices plunged due to a over production in the crude oil market, and a surge in US shale production.

Under the plan, the Kingdom hopes to draw revenues from entertainment, tourism, investment and bi-lateral trade, with over 80 projects financed by the investment arm of the government’s sovereign wealth fund, the Public Investment Fund of Saudi Arabia.