Swedish music streaming company Spotify has announced it now has 50m paying subscribers and it could be going public later this year.

This is a time for celebration for the company, as it is set to move into a new headquarters in New York’s World Trade Centre and add more than 1,000 new jobs to its team.

Thank you to our 50 million subscribers. #Spotify50 pic.twitter.com/eXkOV71bwu

By comparison, Apple Music has around 20m listeners signed up to its paid-for service, whilst Jay-Z’s Tidal has been accused of inflating its subscriber totals.

Last March, Tidal told The Verge it had 3m subscribers, not including free trail-users, however according to the company’s internal report released in January this year, it actually has around 1.2m subscribers.

Now that Spotify appears to be king in the music streaming world, questions are raised about when the company is finally going to go public.

A source familiar with the situation told Reuters that the company with be going public later this year or early next year. Spotify is valued at $13bn according to the source.

However, according to a report by TechCrunch earlier this year, it is apparently considering delaying an IPO until 2018. This delay is down to giving the company more time to improve its finances, before attempting to list at a high valuation.

The last publicly reported valuation for Spotify was $8.53bn, in 2015. Sources told TechCrunch that is wants to target a valuation of $11-13bn, so a big step up from 2015’s figures, which appears to be the same figure the Reuters source said Spotify is valued at.

In 2016, the company’s revenue hit $2bn, but it showed a net loss of more than $200m – so despite the high figures it is still making losses.

This is down to the fact it pays more than 70 percent of its revenues to record labels and publishers. 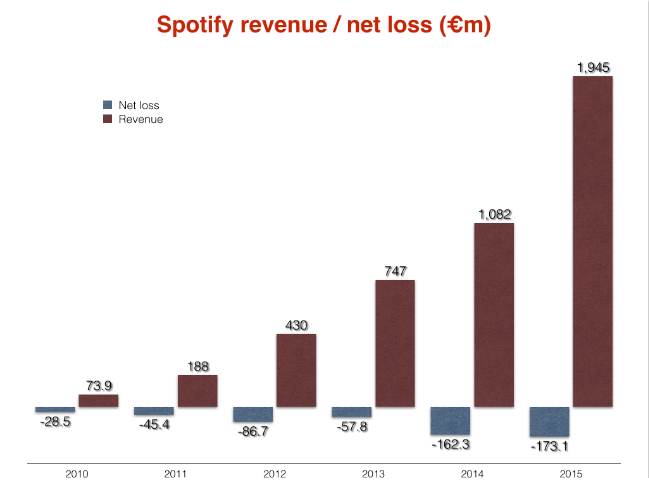 When it announced its results last year, Spotify said it was: “The number one pure play music service – the second largest revenue source to the music industry, both globally and the US.”

“If we cannot maintain Spotify’s culture as we grow, we could lose the innovation, teamwork and focus that contribute crucially to our business.”