Good morning and welcome to Tech Report Weekly 14 September. This week in tech the deadline looms for TikTok’s forced divestiture, Uber fights to keep its licence to operate in London in a showdown with TfL, and Adobe reports third-quarter earnings.

In this week’s Spotlight we take a deeper look at the state of virtual and augmented reality in 2020. The Verdict team has also highlighted some of the top technology journalism we’ve been reading from around the web, as well as key quotes, news and features from our own reporting. If you’d like all of this sent straight to your inbox every Monday at 7am, subscribe here.

What’s happening: TikTok faces a deadline to divest its US operations or face a ban.

Why it matters: The clock is ticking for TikTok. President Donald Trump has given ByteDance, the Chinese owner of the popular video sharing app, until the 15 September to find an American buyer of its US operations. If one is not found, US companies will be banned from doing business with it. This could see US firms barred from placing adverts on the platform, as well as TikTok removed from mobile app stores, such as Apple’s App Store. Clear cut? Not exactly.

Confusion surrounds the deadline for a deal. On 3 August, Trump said TikTok would “close down” on 15 September if a buyer is not found. However, on 6 August Trump signed an executive order that banned US transactions with ByteDance – and by extension TikTok – within 45 days, giving a 20 September deadline. Further confusing the matter is a second executive order issued by the Trump administration on 14 August. This gives ByteDance a 90-day time limit to divest its US operations, which would mean a 12 November deadline. On Friday, Trump reiterated the 15 September deadline.

Microsoft and Oracle have emerged as the most likely companies to acquire TikTok, but a deal is far from guaranteed. TikTok has strongly rejected Trump’s claims that the app, which is used by 100 million Americans each month, poses a threat to national security and has launched a legal challenge against the Trump Administration. Chinese export controls also restrict the sale of assets to companies outside of China, providing yet another layer of complication. Expect major developments this week, but don’t expect this story to be over any time soon.

How to follow it: We’ll be keeping a close eye on any developments in this story – visit verdict.co.uk for the latest.

What’s happening: Uber faces off against Transport for London at Westminster Magistrates’ Court.

Why it matters: Ride-hailing app Uber has had a tough 2020. Lockdown restrictions have caused ride volume to plummet, from 1.6 billion trips globally in the second quarter of 2019 to 737 million in the same period this year. The US firm estimates the pandemic has cost it around $1.8bn so far. Adding to Uber’s woes is a showdown with Transport for London (TfL) in Westminster Magistrates’ Court this week, as the US company fights to keep its licence to operate in the capital.

In November 2019 TfL did not renew Uber’s licence for the second time in two years, citing security risks. Among TfL’s concerns are drivers sharing accounts, with more than 14,000 trips completed by drivers who had faked their identities on the app. That meant those journeys were uninsured and in some cases trips were with unlicensed drivers. For its part, Uber has taken a number of steps to improve safety, such as the ability for riders to share live location with trusted contacts, as well as an emergency assistance button to contact the authorities via the app. While TfL recognised that Uber had made improvements, it said a “pattern of failure” meant it was “not fit and proper”.

London is Uber’s biggest market in Europe, making up the majority of its £60m yearly revenue in the UK. It is a market it can ill-afford to lose, especially at a time when it faces legal challenges on each side of the Atlantic over the employment status of its drivers, which threatens to upend its entire business model. Rivals such as Bolt, Ola, Kapten and others will no doubt be paying close attention to the outcome of this week’s hearing. If Uber does lose its licence, expect an appeal and another year of legal wrangling.

How to follow it: Uber’s court appeal takes place between Monday and Thursday. Visit verdict.co.uk for updates.

Why it matters: Adobe, which develops a suite of software tools used by creatives, has reported record revenue in every quarter going back more than five years. That impressive run is expected to continue this week when it reports its third-quarter earnings. Like many technology companies, the pandemic has helped fuel demand for digital products and services, with Adobe’s Photoshop and Illustrator among the beneficiaries.

In the previous quarter, Adobe’s revenue hit a record high of $3.13bn, up 14% year-on-year. Its share price is up 40% since the start of the year, outpacing the Nasdaq and S&P 500. Its remarkable run has seen its share price soar 480% in five years – slightly surpassing Amazon’s gains over the same period. It highlights the underlying strength in its business model. As one of the original pioneers of the software as a service (SaaS) model, it comes as little surprise that 92% of its revenue comes from licence subscriptions. Over the years the US company has also expanded into more business-focused areas for marketing and ecommerce. Analysts expect Q3 revenue to jump 11% to $3.15bn.

How to follow it: Adobe publishes Q3 earnings on Tuesday at 10pm BST. Visit verdict.co.uk for analysis.

Business and technology in the aftermath of Black Lives Matter 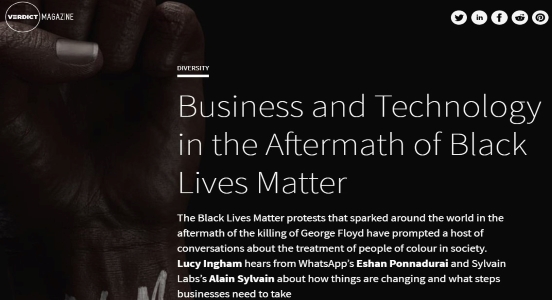 The Black Lives Matter protests that sparked around the world in the aftermath of the killing of George Floyd have prompted a host of conversations about the treatment of people of colour in society. Lucy Ingham hears from WhatsApp’s Eshan Ponnadurai and Sylvain Labs’s Alain Sylvain about how things are changing and what steps businesses need to take.

Spotlight on: Virtual and augmented reality

A few years ago, it seemed like virtual reality (VR) was set for a stellar future. With the Kickstarter-funded Oculus attracting considerable ground, HTC releasing the rival Vive with Steam-creator Valve and PlayStation producing its own futuristic headset, it seemed that the only way was up. But within the first year of these headsets coming on sale, it became clear that VR was not developing in the way many had hoped. While it was seeing some success, its high price point and hardware demands meant that among consumers it was largely only being used by the technologically savvy. More affordable options began to emerge, but these did not achieve the market penetration many had hoped for.

However, what was gaining ground with consumers was augmented reality (AR), though applications such as Snapchat, games such as Pokemon Go and even retail applications. Meanwhile, some areas of industry were increasingly adopting VR to – in the case of architecture – assist with client presentations or support design work or – in the case of heavy industry – provide training. Now in 2020, the walls of AR and VR have truly blurred, with mixed reality (MR) and extended realty (xR) joining them. This has proved particularly beneficial in the creative industries, with xR and MR providing benefits to broadcast television, brand media, the games industry and beyond. This week saw the area get a key boost with the opening of Mixed Augmented Reality Studio (MARS), a purpose-built studio for boundary-pushing creative projects.

However, while the business applications of the technologies are becoming well-established, consumer use of VR in particular remains disappointing. Facebook, which bought Oculus in 2014, is keen to change this, and is doing so by rebranding the company to become more closely tied with itself, forcing all users to use Facebook to log into their devices. The move seems to be an attempt to rid the headsets of their tech nerd image, but core fans aren’t happy – and neither are German authorities. Meanwhile, years after face-based AR flopped with the much-mocked Google Glass, the search engine giant appears to bringing back glasses-based AR with the acquisition of North. The AR and VR market is far more nuanced now than it was when it first emerged less than a decade ago, but it’s clear far more developments remain. And the rise of consumer headsets may yet arrive.

The future of the fashion industry: A digital revolution?

“There are those businesses that don’t have a business plan and haven’t really adapted to this new reality and then there are those that have. But no country will be able to finance all companies which are in trouble at the moment and countries will need to make strategic decisions which businesses and industries they want to rescue.”

– Martina Larkin, head of Europe and Eurasia at the World Economic Forum (WEF), on the survival of businesses during the pandemic.

Carl Miller unearths the efforts to rebuild Isis from a digital backup, in this insightful piece for Wired.

The BBC’s Bill Wilson takes a look at the tech companies enabling fans to safely return to sports’ stadiums.

The Verge’s Zoe Schiffer reports on an alleged pattern of unequal treatment for women and people of colour in the finance team at Pinterest.