Good morning and welcome to Tech Report Weekly 2 November. This week in tech, fintech giant Ant Group completes its market listing in the largest-ever IPO. Americans head to the polls to choose their next president – and Californians decide whether Uber and Lyft should class drivers as employees or contractors. Chipmaker Qualcomm looks set to report its third consecutive earnings beat in its latest quarterly results.

In this week’s Spotlight, we reflect on Big Tech’s quarter of big profits, and how their dominance has grown during the pandemic. The Verdict team has also highlighted some of the top technology journalism we’ve been reading from around the web, as well as key quotes, news and features from our own reporting. If you’d like all of this sent straight to your inbox every Monday at 7am, subscribe here.

Why it matters: Semiconductor maker Qualcomm is expected to report a year-over-year increase in revenues and earnings this week. Analysts forecast revenues of $5.94bn, up 23% from the year-ago quarter. The chipmaker has surpassed earnings estimates for the previous two quarters. The company has signed multi-year licensing deals with Apple, Samsung and Huawei to provide 5G chips. As 5G mobile handset sales increase, this is expected to reflect in increased earnings for the US firm.

In the fintech sector, payments giant PayPal and Jack Dorsey’s Square both report third-quarter results. An analyst consensus predicts revenues of $5.4bn for PayPal, which would mark a 23% year-on-year increase. The launch of PayPal Business Debit Mastercard in five European countries this quarter is expected to provide a boost. Meanwhile, analysts forecast Square’s revenues to grow but earnings to decline.

How to follow it: PayPal reports earnings on Monday, Qualcomm on Wednesday and Square on Thursday. Visit verdict.co.uk for our coverage and analysis.

What’s happening: Voters in California decide whether those working for gig economy companies such as Uber should be given more employee rights.

Why it matters: On the same day that Americans pick their next president, voters in California will be voting whether to classify app-based workers as independent contractors or employees. Proposition 22 follows the California Supreme Court passing a law in 2018 that reclassified gig workers as employees. In response, companies that rely on gig economy workers, including ride-hailing firms Uber and Lyft, filed a ballot measure to exempt themselves from the law. Such ballot measures are effectively a direct referendum on a specific issue. If Proposition 22 is rejected by voters, companies including Uber, Lyft and DoorDash would be forced to give gig economy workers guaranteed benefits such as a minimum hourly wage and access to health care.

The tech companies that launched Proposition 22 argue that drivers support it. Opponents dispute this. The app-based firms have spent more money running advertising campaigns to win over voters than any other California ballot measures in history, outspending labour unions by nearly $200m to $20m.This reflects the scale of the threat that Uber, Lyft and DoorDash view it to their business models, which are already precarious with the two ride-hailing firms yet to make a profit. With the pandemic decimating Uber and Lyft’s revenues, Proposition 22 comes at a hazardous time for the Silicon Valley firms and could see the two companies leave the California market – their ancestral homes.

How to follow it: Voters decide on Proposition 22 on Tuesday at the same time as the presidential vote. We’ll be covering the result at Verdict.co.uk.

What’s happening: The world’s highest-valued fintech company lists on the market in a move that underscores China’s growing position of strength on the global tech stage.

Why it matters: Last week China’s largest online payments platform priced its shares ahead of its initial public offering (IPO), putting it on course to raise more than $34bn and become the largest IPO event in history. Formerly known as Alipay, the fintech is an affiliate company of the Alibaba Group. It operates Alipay, a digital payments platform that serves over one billion people. The crown jewel in entrepreneur Jack Ma’s tech empire, Ant Group is viewed as a national technology champion.

Demand for shares in the tech unicorn have been high as fund managers and retail investors try to gain a slice of a company that is expected to have a valuation of $315bn. Ant Group has decided to carry out a dual listing in Shanghai and Hong Kong, with an equal number of shares in each location. The move is seen as a response to prolonged tensions between Beijing and Washington, with the Trump administration putting restrictions on Chinese firms such as Huawei, TikTok and WeChat. The public listing is expected to bring billions of dollars into China, instead of Wall Street – underscoring China’s ever-growing tech prowess.

How to follow it: Ant Group is scheduled to list on Thursday. We’ll be covering it at Verdict.co.uk. 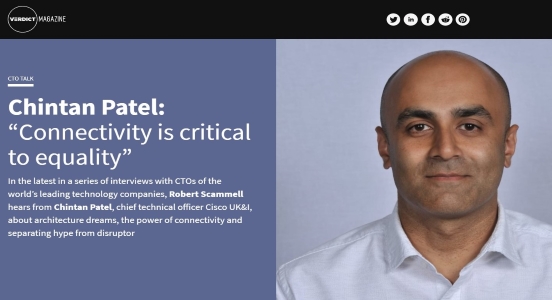 In the latest in a series of interviews with CTOs of the world’s leading technology companies, Robert Scammell hears from Chintan Patel, chief technical officer Cisco UK&I, about architecture dreams, the power of connectivity and separating hype from disruptor.

Thursday saw bumper quarterly results for the big four tech firms, with Facebook, Alphabet, Amazon and Apple beating analysts’ expectations and reporting large profits while many other sectors are hard-hit by the pandemic. Facebook’s revenue was up 22% year-on-year, with Alphabet reporting an increase of 14%, Apple 11% and Amazon reporting a net sale increase of 37%. Earlier this year, Facebook and Google reported a slowdown in online advertising, with Facebook reporting a “significant reduction” in demand for advertising in its Q1 results. Alphabet also experienced a “significant slowdown” in Q1, but both companies appear to have shaken this off as companies continue to place their marketing dollars with the two tech giants.

Despite beating Wall Street estimates, Apple has experienced a significant drop in iPhone sales during the quarter, particularly in China. However, Geoff Blaber, VP research, Americas, at CCS Insight, believes that Apple’s move to diversify its product line has enabled it to remain resilient as the smartphone market slows pace. Given the boom in e-commerce prompted by the pandemic, as well as the growth of cloud services as companies embrace remote working, it comes as no surprise that Amazon has also had a blowout quarter. The company posted a net income of $6.2bn, tripling the $2.1bn profit of Q3 in 2019. Earnings aside, when it comes to reputation, the spotlight is increasingly on Big Tech, particularly Facebook, and its role in the imminent US Presidential Election. Martin Garner, COO of CCS Insight predicts that this scrutiny is not going anywhere, with there “bound to be a large and public post-mortem, whoever wins”.

“Water is a precious resource in space, and we want to know everything we can about water on the Moon. One of the things we don’t know yet is whether the water detected by SOFIA on a sunlit surface is accessible for use as a resource.”

– Paul Hertz, director of the astrophysics division in the science mission directorate at NASA’s headquarters in Washington, on discovering water on the sunlit surface of the Moon.

Troubling research reveals that the US is responsible for far more of the plastic polluting the world’s ocean’s than previously thought, Justine Calma reports for the Verge.

Inside the fight to rid the world of abusive stalkerware

Wired’s Helena Pozniak examines the worrying rise in the use of abusive stalkerware during lockdown.