Good morning and welcome to Tech Report Weekly 21 September. This week in tech MPs question a TikTok representative in its ‘online harms’ inquiry, Jimmy Wales headlines Big Data LDN and Blackberry hopes for an earnings surprise in its Q2 results.

In this week’s Spotlight we take a deeper look at how the coronavirus is reshaping the economy, including a shift to the virtual and passion economies. The Verdict team has also highlighted some of the top technology journalism we’ve been reading from around the web, as well as key quotes, news and features from our own reporting. If you’d like all of this sent straight to your inbox every Monday at 7am, subscribe here.

Have an excellent week and we hope you enjoy Tech Report Weekly.

Why it matters: TikTok appears to have survived a US ban after US President Donald Trump expressed approval to a deal that will see it partner with Oracle and Walmart. Now, the Chinese video-sharing app faces a task on a much smaller scale: convincing MPs that it can protect its 3.4 million monthly UK users from disinformation, censorship and harmful content, as part of a wider inquiry into online harms and the ethics of data use.

It comes weeks after a graphic video of a man committing suicide during a Facebook Live video was then circulated on TikTok, where it was viewed by horrified children. TikTok, which uses software to automatically flag and take down such content, struggled to remove the video. Incidents like these are bound to be raised with TikTok director of public policy EMEA Theo Bertram, who is representing the company in its first appearance before the committee. Committee members will also explore the wider political issues facing TikTok, including allegations of political censorship. Chinese tech expert Rui Ma and Beijing-based FT journalist will provide evidence on this area. The inquiry has previously questioned representatives from Google, Facebook and Twitter about the actions they have taken to tackle misinformation, including false coronavirus information.

How to follow it: The evidence session takes place Tuesday at 10am BST. You can watch it live on Parliament TV, or visit verdict.co.uk for our write-up.

Why it matters: Big Data LDN may have been forced to run an online-only conference due to coronavirus restrictions, but this has had no impact on its ability to attract the highest calibre of speakers at the two-day event. Jimmy Wales, founder of Wikipedia, headlines day one of the UK’s largest event on all things data. On day two Hannah Fry, author of ‘Hello World’ and mathematician extraordinaire will give the opening keynote.

“Jimmy Wales has pioneered one of the world’s greatest data repositories and Hannah Fry has popularised algorithms trying to solve the mystery of why human beings fall in love with each other,” said Bill Hammond, Big Data LDN Event Director. “Delegates can benefit from this wealth of knowledge at a time of vital importance to UK businesses.” In addition to Wales and Fry, representatives from IBM, Oracle, Microsoft, Starling Bank, AWS and many more will be giving exclusive talks. The event, which usually packs out the Olympia London, is aimed at those looking to learn practical steps to get the most out of data for their organisation.

How to follow it: You can register for the event, which runs Wednesday to Thursday, for free here.

Why it matters: Perhaps still best known for its once-dominant, eponymous mobile device, BlackBerry has struggled to achieve growth since it pivoted into enterprise software and the internet of things in 2015. Since then, the Canadian multinational has struggled to gain the momentum that it had during its consumer handset heyday. During this time, it has made a number of acquisitions, some of which have proved more successful than others. Among them are antivirus software company Cylance. All indications are that so far it has not paid off, with its earnings not listed in the previous quarter’s earnings report.

In the previous quarter, BlackBerry revenues were down 20% year-on-year. It was also the fifth consecutive quarter in which BlackBerry incurred a loss. This time around, analyst are predicting revenues of $214.1m, which would mark a year-on-year decline of more than 8%. Investors will be hoping for an earnings surprise that boosts the company’s share price, which is down 24% since the start of the year, although it has rallied in the past month.

How to follow it: Blackberry publishes Q2 results on Thursday at 8am ET / 1pm BST. Visit verdict.co.uk for analysis.

Verdict Magazine issue 5 is out now 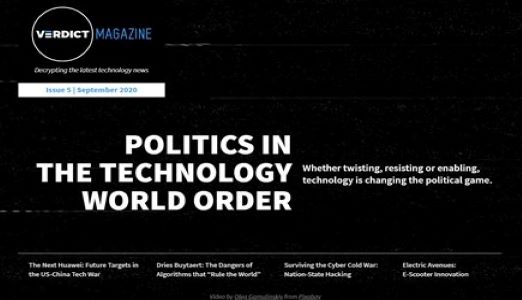 Verdict Magazine issue 5 is now out, providing the usual analysis, long reads and deep dives into the biggest topics impacting the world of technology. And this month we’re turning our attention to the challenges at the intersection of technology and politics, both in the US and beyond.

Spotlight on: The new lockdown economies

Covid-19 and its associated lockdowns have not been great for many economies. The night-time economy is in tatters, as is the lunchtime economy, with the hospitality industry on its knees from this double blow. In business, the economy surrounding the events industry has also struggled immensely, and while the move to virtual events has seen some benefits, it has not filled the financial chasm left by their physical counterparts.

However, it’s not all bad news. The pandemic has also added considerable fuel to a number of economies that existed pre-pandemic, but as early sparks, building them into areas that now look set to become dominant financial contributors. One of these is the virtual economy, which covers income generated entirely online, typically within platforms or games. Selling in-game items, creating digital assets or streaming gameplay are all viable ways to make money within the virtual economy, which is now worth $66.2bn a year. And during the pandemic, participation in the virtual economy has surged, as consumers redirect their spending to the digital world and away from the physical. Online games spending, for example, climbed 11% in June alone. For many, it is now a much-needed supplemental income and an environment with considerable economic potential for companies.

Meanwhile, the virtual economy’s cousin, the passion economy, has also seen considerable growth. This sees participants monetise hobbies or passions, typically through online platforms, with connections with customers being particularly key. As with the virtual economy, it has surged amid the lockdown. And with Patreon leading the way as a key vendor, is now attracting considerable investor interest for companies finding novel ways to serve people operating within it. We sit within a severe recession, with no clear end to the pandemic in sight. But there is economic growth to be found; you just have to look online to find it.

TikTok to become US company with ByteDance, Oracle owning shares

– Gerald Gouriet QC, representing the London Taxi Drivers’ Association, on Uber’s alleged cover up of rides carried out by drivers who faked their identity on the app.

America is a smoking fascist dystopia

Umair Haque, director of the Havas Media Lab and author of The New Capitalist Manifesto, addresses the state of the US, including the treatment of ICE detainees and Trump’s latest political manoeuvrings, in this eye-opening Medium post.

How CRISPR is helping scientists create a better coronavirus test

The Verge’s Casey Newton looks at the poetic possibilities of Instagram co-founder and former CEO Kevin Systrom taking the reigns at TikTok in the US and taking on Facebook.