Good morning and welcome to Tech Report Weekly 23 November. This week in tech Dell and HP report quarterly earnings as they battle it out to take the biggest slice of a booming PC market. MPs debate whether there’s an opportunity for UK 5G innovation post-Huawei. And the IoT Tech Expo gets underway to explore the latest industry trends in the world of connected devices.

In this week’s Spotlight we dissect Airbnb’s IPO warning that it may never be profitable. The Verdict team has also highlighted some of the top technology journalism we’ve been reading from around the web, as well as key quotes, news and features from our own reporting. If you’d like all of this sent straight to your inbox every Monday at 7am, subscribe here.

Why it matters: PC sales are booming thanks to the surge in remote working and home learning sparked by the coronavirus pandemic. Who is gaining the biggest slice of the pie?  When Dell posts its quarterly results this week it is expected to have benefited from enterprise IT spend on cloud services. However, analysts predict it will have lost out to rivals Lenovo and HP this quarter in the PC market. This looks likely to hit Dell’s top line, with Wall Street expecting revenues to come in at $21.88bn, which would mark a 4% year-on-year decline. Earnings per share are pegged at $1.75.

HP also reports earnings this week and while it has a strong position in the global PC market, it has seen printer revenues decline in the previous two quarters due to office closures. Analysts forecast earnings per share of $0.52 on revenue of $14.64bn, down on the year-ago quarter when revenue came to $15.41bn. HP managed to capture an estimated 23% of American PC sales in the previous quarter – investors will be keen to see the company improve that margin and win business from Lenovo.

How to follow it: Dell and HP report results on Tuesday.

What’s happening: MPs discuss the business and economic opportunities that might lie in Huawei’s exclusion from the UK’s 5G network.

Why it matters: Four months on from the UK banning Chinese telecommunications giant Huawei from its 5G network and the cards are still being reshuffled. Rivals Nokia and Ericsson have been capitalising on Western pushback against Huawei, snapping up 5G deals around the world. But is there scope for UK industry to step in – and benefit – from Huawei’s exit?

Conservative MP Alun Cairn believes there is, and has called a Westminster Hall debate to explore the “business and economic opportunities” post-Huawei.  The Vale of Glamorgan MP told Verdict that he wants to “highlight the expertise [the UK] has in certain fields of 5G and to call on the government to play a role to facilitate collaboration”. Cairns believes that the Department for Business, Energy & Industrial Strategy’s role in generating interest in small modular reactors, along with the Advanced Propulsion Centre’s work promoting electric vehicle research, are examples of how this might work. “These needn’t be replicated but they are examples of how government can bring businesses and sectors together,” he said. “5G elements need to be at the forefront of their thinking.”

How to follow it: You can watch the debate live on Parliament TV from 4:30pm on Tuesday here.

Why it matters: It’s difficult to calculate just how many internet of things (IoT) devices there are in the world, but one thing is sure – their number is growing rapidly. At the end of 2019 there were an estimated 7.6 billion IoT devices, and that figure is predicted to soar to 24 billion by 2030.

As IoT continues to play a critical role in our lives, the latest developments in the industry become increasingly important. The IoT Tech Expo Europe looks to explore the latest innovations, trends and best practices in the IoT ecosystem. Speakers at the two-day event include representatives from Airbus, Transport for London and EDF Energy. Day one focuses on ‘applied strategies for the IoT’. This includes talks on IoT in the home, retail and construction. Day two looks at the growing use of enterprise IoT, how it ties into digital transformation projects, as well as smart cities.

How to follow it: You can register to attend the event here.

Gen Z and technology: The new power couple in town

Generation Z, or Gen Z for short, is emerging as a powerful consumer group and future workforce. Isla MacRae explores the values and technological understandings that drives this group’s behaviour, and what businesses need to know to connect. 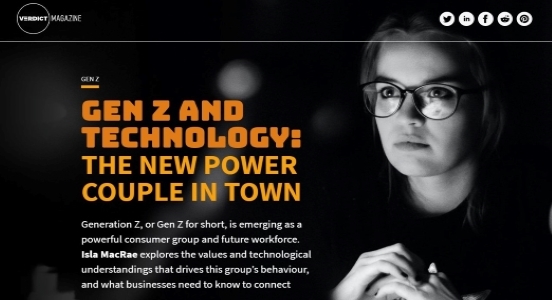 In one of the most highly anticipated initial public offerings (IPO) of 2020, home rental startup Airbnb had a confession to make. “We have incurred net losses in each year since inception, and we may not be able to achieve profitability,” the company said in its IPO prospectus. Sound familiar?

In 2019, ride-hailing firm Uber became a public at a time when it was deeply unprofitable. It too warned that it may never achieve profitability. It remains unprofitable today, although its planned path to profitability has been hampered by the pandemic. Airbnb and Uber aren’t alone. This trend has been gaining momentum for several years now. In 2018, 81% of US companies did not make a profit in the year leading up to their public listing, according to data from IPO specialist and University of Florida finance professor Jay Ritter. For tech companies, that figure rises to 84%. The last time the rate was that high was in 2000, the year of the recession inducing dot-com bubble.

So why do these loss-making tech companies command such high valuations? In short, investors believe that their long-term profits will outstrip the short-term losses. Long-term growth has been the preferred metric for investors who all want to see their investment turn into the next Amazon, Google or Apple. The goal is to fuel growth until it has hit a scale to dominate its market and focus on the bottom line. But for Uber, that time is likely to be when driverless cars become mainstream, a prospect that remains some way off. Meanwhile, Airbnb finds itself hobbled by pandemic travel restrictions, which are likely to continue in 2021 until a vaccine can be widely distributed. However, in a sign that it can turn things around, it reported a profit in the third quarter this year. This followed emergency cutbacks on marketing spend and staff – two key growth engines. As younger companies like Airbnb eye the profits of Big Tech firms with jealousy, they may have to relinquish their growth at all costs strategy for more stability in the age of coronavirus.

Huawei sells Honor brand due to “tremendous pressure” from US sanctions

“We hope that regulators will ignore Apple’s window dressing and act with urgency to protect consumer choice, ensure fair competition and create a level playing field for all. Apple’s anti-competitive behaviour threatens all developers… their App Store policies are arbitrary and capricious.”

For Wired Rhiana Gunn-Write explores the importance of clean energy investments in the post-Covid economic recovery.