Good morning and welcome to Tech Report Weekly 24 August. This week in tech Elon Musk will provide a progress update on Neuralink, the company developing a brain-machine interface; the UK’s Supreme Court passes down a judgement on a patent dispute involving Huawei that could have ripple effects for the telecommunications industry; and Salesforce, Dell and HPE report their latest quarterly results.

We’ll also be taking a deeper look at Uber and Lyft in California and what the injunction means for the gig economy in this week’s Spotlight. The Verdict team has also highlighted some of the top technology journalism we’ve been reading from around the web, as well as key quotes, news and features from our own reporting. If you’d like all of this sent straight to your inbox every Monday at 7am, subscribe here.

What’s happening: Elon Musk will provide an update on the progress made by his neurotechnology company, Neuralink.

Why it matters: It’s been fairly quiet on the brain-machine interface front since Elon Musk announced just over a year ago – and to great fanfare – that Neuralink had made big steps in its quest to merge humans and machines. Now, the billionaire tech entrepreneur has promised an update.

In typical Musk fashion, he announced the update in a series of cryptic tweets last month. “If you can’t beat em, join em… Neuralink mission statement…progress update August 28…AI symbiosis while u wait”. The last tweet appears to make reference to the explicit purpose of the company: to meld humans with artificial intelligence. Musk believes that failing to do this will see humans surpassed by AI. Not all experts agree. On its way to this goal, Neuralink wants its brain-machine interface technology, which consists of a tiny brain implant containing more than 3,000 electrodes attached to flexible “threads”, to provide assistance to those with neurological disorders. Those with limited mobility, for example, could control a computer using their brain.

Neuralink is by no means the only company researching this area. But Musk is known for big visions and creating a whir of publicity that few other companies can. The details of this week’s announcement have been kept under tight wraps, but many are expecting an update on human trials, which Musk previously promised as soon as this year.

How to follow it: Musk said he will provide the Neuralink progress update on Friday. We’ll be following the story at Verdict.

Why it matters: When a technology standard is essential for an industry, known as an SEP, there are safeguards in place to prevent the patent holder from charging extortionate fees. At the same time, those that have invested time and money to advance the technology are granted protections to ensure innovation is rewarded. As a result, these SEPs must be made available on a licence that is fair, reasonable and non-discriminatory – or FRAND.

Enter Chinese telecommunications giant Huawei, which has argued against a global licensing agreement for wireless 2G, 3G and 4G communications patents offered by mobile software supplier Unwired Planet. Instead, Huawei wants to use a UK-only licence to use the SEPs. The Supreme Court will determine whether The High Court previously backed Unwired Planet’s position, determining that the conditions were FRAND. Huawei appealed the ruling, but was unsuccessful in the Court of Appeal, leaving the Supreme Court as its final legal avenue. (A separate case between Huawei, ZTE and patent owner Conversant will be decided at the same time, which will determine whether the Chinese court is the appropriate place to set licence terms.)

If the decision is upheld, UK courts will have the power to arbitrate the terms of SEPs on a de facto global scale – an attractive proposition for SEP holders. If the court decides in Huawei’s favour, licences will need to be agreed on a country-by-country basis. This could make it easier for larger companies to avoid paying to use a patent owned by a smaller company in certain jurisdictions. Whatever the decision, it is likely to have far-reaching ramifications for providers of communication technology, particularly internet of things business that will rely on 5G. It could also see a greater volume of litigation in the UK.

How to follow it: The judgement will be given on Wednesday at 9:45am via videolink. We’ll be covering the news as it happens.

Why it matters: The pandemic has accelerated digital transformation regimes for many businesses. Salesforce is hoping to benefit from increasing demand for business software solutions. Analysts seem to think the US company will, with revenues expected to come in at $4.90bn, a 22.6% increase from the year-ago quarter.

Things look less rosy for HPE, the enterprise arm of Hewlett Packard. Analysts are predicting quarterly revenues to drop by 15% from a year ago, at $6.14bn. This is off the back of a disappointing previous quarter, with pandemic-related supply-chain disruptions weighing heavily on the US multinational, which sells products such as servers, data storage technology and networking equipment.

Meanwhile, analysts forecast Dell Technologies’ revenues to decline by 3.9% from the year-ago quarter at $22.46bn. Dell’s share price is up by more than 15% for the year to date.

How to follow it: HPE and Salesforce post Q3 and Q2 results on Tuesday, while Dell reports its Q2 results on Thursday. Visit verdict.co.uk for analysis of the results.

Uber Eats: Thriving in the Pandemic and Beyond 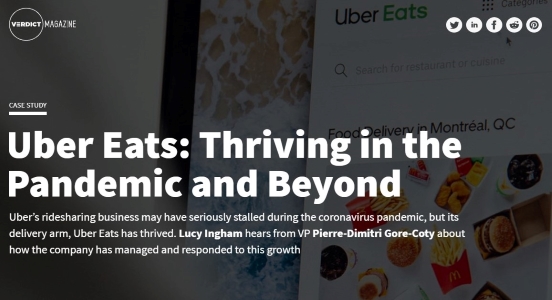 Uber’s ridesharing business may have seriously stalled during the coronavirus pandemic, but its delivery arm, Uber Eats has thrived. Lucy Ingham hears from VP Pierre-Dimitri Gore-Coty about how the company has managed and responded to this growth.

Spotlight on: Uber and Lyft in California

Workers’ rights have been a key subject of discussion in technology this week thanks to a legal row in the state of California, the US. Two weeks ago, a California judge issued a preliminary injunction that compels ride-hailing leaders Uber and Lyft to re-classify drivers as employees instead of independent contractors. The news was welcomed by campaigners, who have long railed against the approach due to the lack of security, sick pay and healthcare benefits it produces. However, for both companies it represented a serious blow.

Treating drivers as independent contractors helps keeps costs low for both companies, and is central their ability to provide cheap rides for users. California also represents a vital market for the industry, and losing it would represent a key blow given that neither company is profitable and both saw serious losses in their Q2 results. Lyft reported a 61% drop in revenue, while Uber’s ride-hailing segment saw a 67% decline. However, with the injunction in place, both companies nevertheless prepared to see their California businesses cease operations this week. On Wednesday, a survey by anonymous professional network Blind found that 100%of Lyft employees expected the company to temporarily suspend operations in California, while 88% of Uber employees said the same. 93% of employees at both companies said they did not think the companies should reclassify drivers as employees.

The Lyft results clearly indicated an official announcement was imminent – and on Thursday the company said it would be halting rides in California that evening. But with just hours to go, the companies’ appeal of the original injunction bore fruit. Although the court is still considering the appeal, it has granted them the right to continue operating with independent contractors while it does so. Uber and Lyft can breathe freely – for now. The issue, however, is far from over. Not only is the appeal still being considered, but a ballot, proposition 22, will be put to the Californian electorate in November at the same time as the US presidential election that, if passed, will grant the companies an exemption. The entire model of the gig economy hangs in the balance in California, and depending on how voters decide, there could be profound impacts for both workers and tech companies in Silicon Valley and beyond.

“Just because the outcome went the way it did today it does not mean that the AI wasn’t latching onto some weird digital artefact that we weren’t thinking about or considering and that’s what was giving them an advantage. There were certainly some peculiar behaviours in the engagement.”

Emma Graham-Harrison and Alex Hern explore how Facebook is funnelling readers towards fake Covid-19 news, despite earlier promises of a clampdown, in this piece for The Guardian.

Wired’s Matt Burgess explores what can be learnt from the A-level algorithm fiasco.

Your brain, with a USB port in it: Elon Musk’s Neuralink vision divides experts

Claudia Glover takes a deep dive into Neuralink in this well-researched piece for Computer Business Review.