Good morning and welcome to Tech Report Weekly 27 July. This week in tech the CEOs from Amazon, Facebook, Google and Apple had been set to face a grilling from US lawmakers. But with the death of politician and civil rights leader John Lewis, this is now likely to be postponed. However, later in the week all four will be posting their latest earnings, which are set to provide strong guidance on the performance of the tech industry for the rest of 2020.

Meanwhile, NASA’s Perseverance mission heads to Mars in search of signs that life was once present on the red planet, while Virgin Galactic will be grabbing attention in the commercial space industry with a virtual reveal of its spaceship cabin design.

We’ll also be shining the spotlight on the cyber and disinformation threat that Russia poses to the UK in light of the long-awaited Russia report. The Verdict team has also highlighted some of the top technology journalism we’ve been reading from around the web, as well as key quotes, news and features from our own reporting. If you’d like all of this sent straight to your inbox every Monday at 7am, subscribe here.

Have a fabulous week and we hope you enjoy Tech Report Weekly.

Why it matters: Although now not likely to be facing Congress this week, the Big Four tech firm CEOs will be turning their attention to financials as they release their latest earnings for the period ended 30 June. While Q1 was only partially affected by the coronavirus, Q2 will show the true impact of the pandemic when it was at its peak.

For Amazon, the pandemic has been a boon as ecommerce demand has skyrocketed during lockdown. Facebook and Google saw an advertising slowdown last quarter as firms reigned in budgets. Apple is arguably the most exposed to the pandemic, with disrupted supply chains and shop closures hurting its revenue in the previous quarter.

How to follow it: Facebook posts its earnings on Wednesday, while Amazon, Apple and Google report earnings on Thursday. We’ll be covering the highlights throughout the week – visit verdict.co.uk for all the latest.

Perseverance launches to Mars to look for ancient life

Why it matters: NASA is returning to Mars and it is hunting for signs of ancient life. On Thursday its Perseverance Rover, housed in an Atlas V-541 rocket, is scheduled to blast off from Canaveral, Florida, US. If all goes as planned, the rover will arrive on Mars on 18 February 2021, landing at the Jezero Crater. Once there, it will spend at least 687 days collecting soil samples with the goal of returning them to Earth for analysis. The mission will also gather data to inform future human expeditions to Mars.

However, rocket launches are notorious for being postponed due to adverse weather conditions. Perseverance’s targeted launch date has been pushed back three times already and if the conditions aren’t right this week the launch window will extend to 15 August.

How to watch it: The rocket is slated to launch at 7:50am EDT on Thursday. It will be broadcast live on NASA TV via YouTube.

Why it matters: Although a long-established player in the commercial space industry, Virgin Galactic has had a number of problems that have seen its plans for sub-orbital tourism flights repeatedly delayed, including the death of a pilot during test flights in 2014. And although this has prompted skepticism that we will ever see the company operate as it originally planned, Virgin Galactic has been adamant that its goal will eventually be achieved.

The unveiling has been described as a key “milestone towards Virgin Galactic’s operational readiness”, and will show how the company is blending design and safety to provide “an unparalleled and safe consumer experience”. It will also generate enthusiasm for the company, which will be releasing digital platforms where fans can explore the cabin in an immersive environment.

How to watch it: The reveal will be conducted via a YouTube live-stream from 1pm ET on Tuesday. 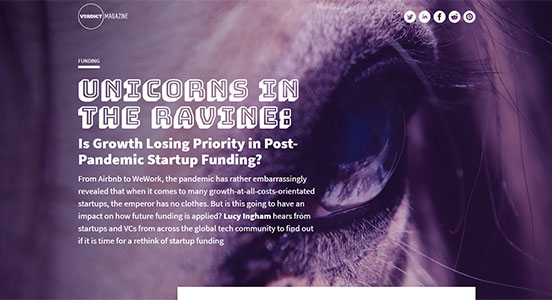 Unicorns in the ravine: Is growth losing priority in post-pandemic startup funding?

From Airbnb to WeWork, the pandemic has rather embarrassingly revealed that when it comes to many growth-at-all-costs-orientated startups, the emperor has no clothes. But is this going to have an impact on how future funding is applied? Lucy Ingham hears from startups and VCs from across the global tech community to find out if it is time for a rethink of startup funding.

Spotlight on: The Russian threat

The big news in the UK this week was the long-awaited Russia Report, which was finally published after a nine-month delay.

Although heavily redacted, the report was damning of the UK government, revealing a reality where not only was Russian interference and utilisation of the UK as a “laundromat” a firm reality, but that little had been done by intelligence and security services to identify and put a stop to it.

While there was no confirmation that Russia had interfered in the Brexit referendum, this wasn’t because the evidence said so – the problem was that no assessment had even been conducted despite outside groups suggesting there had been state interference.

Similarly, concerns around disinformation campaigns conducted by the Russian government had not been adequately tackled, with the report accusing government departments and intelligence agencies of refusing to take responsibility, instead passing the issue round like a “hot potato”.

However, there were also actionable recommendations, including the call for the UK not only to double down on offensive cyber capabilities to retaliate against state-backed cyberattacks from the likes of Russia, China, Iran and North Korea, but also to develop and lead global actions on the issue.

Amidst all this, businesses are likely to continue to be in the digital firing line – as they have been in past attacks, such as WannaCry. The advice from cybersecurity professionals is clear: beef up security and remain more vigilant than ever.

Can the challenger bank from Natwest prove its Mettle?

Why the pandemic has accelerated Industry 4.0 and what it means for businesses

“The reason that we are experiencing this gap is that free markets essentially failed the US, Canada and the UK in creating this [5G] market – free markets being capitalism.”

Why Hundreds of Mathematicians Are Boycotting Predictive Policing

Courtney Linder takes a deep dive into the problematic world of predictive policing to identify why its use is proving so controversial among US academics in this piece for Popular Mechanics.

The stress of leading a start-up through the pandemic

The BBC’s Sooraj Shah explores the challenges and rewards of steering a tech startup through the pandemic.

Down the rabbit hole: how QAnon conspiracies thrive on Facebook

The Guardian’s Julia Carrie Wong delves into the murky world of QAnon conspiracy theorists – and how Facebook has allowed them to thrive.