Good morning and welcome to Tech Report Weekly 29 June. This week in tech the UK weighs up the pros and cons of legalising e-scooters, eBay holds its AGM amid ex-employee controversy and GSMA Thrive gets underway in China.

We’ll also be shining the spotlight on the never-ending saga of Huawei in the UK’s 5G network, which once again looks uncertain despite being given the green light in January. The Verdict team has also highlighted some of the excellent technology journalism we’ve been reading from elsewhere, as well as key quotes, news and features from our own reporting. If you’d like all of this sent straight to your inbox every Monday at 7am, subscribe here.

Have a splendid week and we hope you enjoy Tech Report Weekly.

What’s happening: The UK government’s Transport Committee holds its first evidence session to explore the viability of making electric scooters, or e-scooters, legal across the country.

Why it matters: Using an app to hire an e-scooter in US and European cities is not uncommon. But the UK is currently in the strange position where it is legal to buy an e-scooter, but illegal to ride it on the road or pavement.

Yet so-called micro mobility vehicles could play a role in reducing dependency on other forms of transport that emit greenhouse gas emissions. In April, the Transport Committee launched an inquiry to “explore the safety and legal implications of electric scooters, their impact on congestion, and potential contribution to reducing the UK’s greenhouse gas emissions”. It will see transport experts from academia and industry, as well as representatives from the Royal National Institute of Blind People, give evidence.

The government is also carrying out a trial for e-scooter rental schemes this summer, which means we could be seeing Bird and Lime scooters on UK streets in the not-too-distant future.

How to watch it: You can watch a livestream of the evidence session from 9:30am on Wednesday here.

Why it matters: eBay’s shareholders gather virtually to hear an update from the firm’s leadership. Their primary concern will be the firm’s recent performance; in its first-quarter earnings eBay reported mixed results, with sales of $2.374bn down 2% year-on-year.

In April, eBay saw off active investor Starboard Value after the appointment of a new CEO, Jamie Iannone. But it is former eBay employees that have been making headlines of late for all the wrong reasons. Earlier this month, six ex-eBay senior staff were charged with cyberstalking after allegedly sending the publisher of an online newsletter live spiders, cockroaches and a pig foetus while at the company. Authorities said the staff, including the senior director of safety & security, took issue with the newsletter’s coverage of eBay (if any of the former employees happen to be reading this newsletter, I really hate beer and cake – please don’t send me any).

While the ongoing court proceedings against former staff is an unwelcome smear of the brand for eBay, of more pressing concern to shareholders is the impact of Covid-19 on eBay’s business, which had caused supply issues earlier in the year.

How to watch it: Shareholders will be attending the AGM on Monday at 8am PDT via a webcast.

Why it matters: It seems a lifetime ago that GSMA, the telecoms industry organisation, was forced to cancel its flagship event, Mobile World Congress, over coronavirus fears. Since then, all events have been scrapped, rescheduled or moved online. The latter is what has happened with GSMA’s Shanghai MWC event, which has been replaced by the virtual event GSMA Thrive.

The event features a host of leading figures from the telecoms industry, including the rotating chairman of Huawei, Ping Guo; the president of Qualcomm, Cristiano Amon and the CEO of VMware, Pat Gelsinger. Among the topics to be explored are 5G, AI and IoT.

How to watch it: You can tune into the event, running from Tuesday to Thursday and taking place in China Standard Time, for free by signing up here.

Transform or lose: How the coronavirus is accelerating industry 4.0 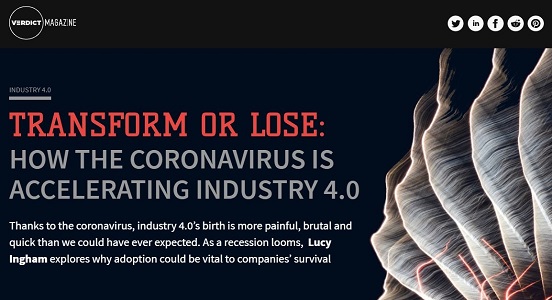 Thanks to the coronavirus, industry 4.0’s birth is more painful, brutal and quick than we could have ever expected. As a recession looms, Lucy Ingham explores why adoption could be vital to companies’ survival.

Spotlight on: Huawei in the UK

In January, it was announced that Huawei infrastructure would be allowed in “non-core” parts of the UK 5G network, with a 35% market cap. However, the US has put pressure on the UK to ban the company from its network, warning that it could impact the intelligence-sharing relationship between the two countries.

The US has placed sanctions against the company on national security grounds, due to claims of Chinese military involvement, something Huawei denies. Under the sanctions, US semiconductor companies not are permitted to sell their technology to Huawei. This led the UK government to “look carefully at any impact they could have to the UK’s networks”.

Last month, the UK National Cyber Security Centre began a review of how the sanctions could affect the use of Huawei technology in the UK, with a decision expected in the near future. US sanctions limit Huawei’s ability to access the equipment needed for its products to run as the US currently dominates the global semiconductor market, supplying technology to many chipmakers worldwide. This could be enough for the UK government to make a U-turn on its decision made in January.

However, a ban on the company’s technology from the UK network has the potential to slow the rollout of 5G in the UK, with a 2019 report by Mobile UK finding that if the “use of Huawei for 5G rollout is restricted”, it could lead to an 18 – 24-month delay in the widespread availability of 5G, and could potentially cost the UK economy £6.8bn.

SoftBank managing partner: ‘We learned our lesson with WeWork’

“Remember that we have politics because it’s a substitute for murder and savage killing.”

– Anthony Scaramucci, the former White House communications director for US President Donald Trump, on Twitter’s role in the 2020 election.

We’re living in the retro-future

Ashley Fetters explores how technology and social trends have interacted during the lockdown in this insightful yet mildly depressing piece for The Atlantic.

With older people disproportionately affected by the coronavirus pandemic, Wired’s David Cox asks whether the science of the ageing process could be used to tackle the virus.

Wrongfully accused by an algorithm

It has been known for some time that facial recognition software is less accurate on people of colour. The New York Times’s Kashmir Hill tells the story of Robert Julian-Borchak Williams, the first confirmed case of a person being wrongly arrested after a false facial recognition match.