In a bid to halt its free-falling share price, electric car marker Tesla has released a statement saying it produced 2,020 of its Model 3 sedans over the last week.

While that’s still short of Tesla’s target of 2,500 per week for the end of March it’s a dramatic improvement on the 793 Model 3s it built in the final week of last year.

Tesla also said it would produce the same number of its Model 3 car next week and expected output to climb throughout the second quarter of the year. It reaffirmed a production target of 5,000 Model 3s per week by the end of the second quarter.

The company said in a statement it expects the Model 3 production rate will increase “rapidly” through the second quarter and said it will make 5,000 units a week in “about three months”.

We were able to double the weekly Model 3 production rate during the quarter by rapidly addressing production and supply chain bottlenecks, including several short factory shutdowns to upgrade equipment.

Tesla’s share price has struggled in recent weeks due to a fatal car crash and the Model 3’s slow rate of production. Tesla share price had its second-worst month ever in March, losing 22%.

However, shares of the Palo Alto, California-based company climbed 6% in premarket trade in New York. 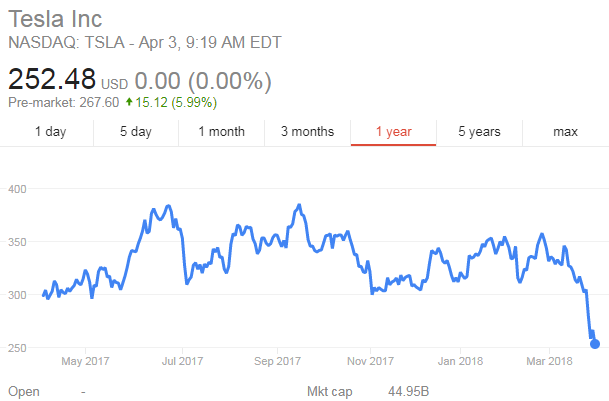 Telsa’s high-profile chief executive Elon Musk took to Twitter on 1 April to post about the company’s woes, in a series of April Fool’s Day messages.

There are many chapters of bankruptcy and, as critics so rightly pointed out, Tesla has them *all*, including Chapter 14 and a half (the worst one).

In the tweets he mocked analyst and investor concerns the company would not be able to survive due to its recent missteps and missed production targets.