Snap Inc, the parent company of the messaging app Snapchat, was the biggest tech stock market listing since 2014 when it floated on the New York Stock Exchange earlier this year.

On Snap Inc’s first day of trading, shares jumped by more than 40 percent to over $24, valuing the startup at over $28bn.

But the honeymoon phase has come to an end after the announcement of Snap’s results in the latest quarter.

After posting a $2.2bn loss and a slowdown in user growth, Snap’s shares fell just over 25 percent down to near its IPO level of $17. This means that Snap’s co-founders, Evan Spiegel and Bobby Murphy, each lost more than $1bn in just one day. 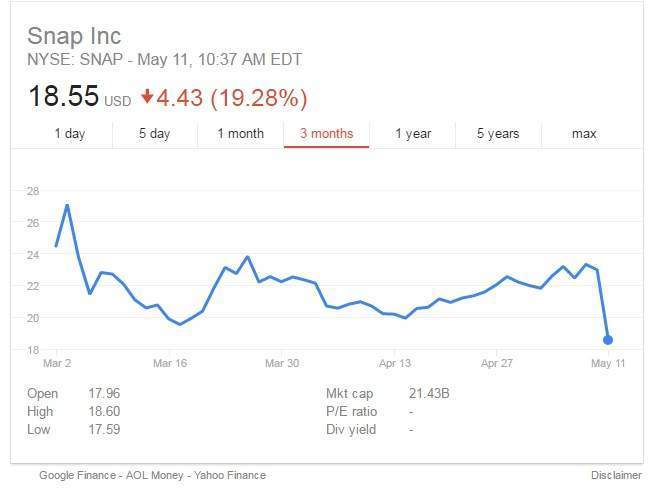 In terms of user growth — another important reading for investors — the app’s daily active users grew five percent from last quarter to 166m from 158m.

This is the slowest growth Snapchat has had in the past two years.

The fact the company has lost $2.2bn sounds bad at first but actually, this is mainly stock-based compensation, so that figure isn’t really something to be too concerned about as it is a one-off cost.

The real issue for Snap is its messaging app’s slowdown in user growth.

“The value of the company is really based on growth. If you’re in this kind of company, the one thing that matters is you’ve got to get growth right,” Rob Kniaz, founding partner at early stage venture capitalist firm Hoxton Ventures, told Verdict.

If you look at Snap’s rate of growth increases, it’s pretty bad almost to the point of being dismal. By the end of this year, at the current pace, growth is going to be flat or even negative.

For social networks, like Snapchat, Facebook and Twitter, there needs to be growth in the user base because this is where revenue comes from – such as the APRU figures.

“But, you expect with a business like this which is still small and so high growth, to have that drop down is a red flag. Not only is growth a problem, but the underlying fundamental for revenue is not as strong as people may have hoped,” said Kniaz.

In a call to investors, Spiegel attempted to lie some of the blame with Facebook which has been successful in copying Snapchat’s Stories feature and taking it to Instagram and its own platform. He said:

If you want to be a creative company, you have to be comfortable with and enjoy the fact people copy your products if you make great stuff. Just because Yahoo! has a search box doesn’t mean they’re Google.

But Facebook has taken elements of Snapchat, such as stickers and Stories and made them better.

Instagram Stories, which launched last August, now has more than 200m users – which is more than Snapchat’s 166m.

“There’s never been a case I can think where a competitor has copied a product this well, and to me it says that Snap to some extent is a one trick pony. It feels like competitors, namely Instagram and Facebook have really boxed it in and killed all growth,” said Kniaz.

Snap’s investors are clearly unhappy with the recent announcement which has been reflected in the stock price. And it’s not hard to compare this recent fall in confidence to what Twitter has faced over the years.

“Twitter has had the same problems, their market cap has gone down substantially, they’ve lost almost all of their good people over the last four or five years and people have lost faith in the leadership. The product is tremendously interesting, it has a large user base with very engaged users, but they’re not really going to increase revenue right now without better products.”

This brings us to the Snap Spectacles. When Snapchat rebranded as Snap Inc, the startup said the decision was because it was more than a social media company, it was a camera company.

Then it released its augmented reality glasses, Snap Spectacles and they’ve been doing relatively well, with sales reaching 90,000 so far.

Products such as this could keep the company moving, but Spiegel and Murphy need to act fast.

“I think for this kind of business, the only thing to do is to keep innovating, keep figuring out new products and find products that work. Right now, with the growth story falling, they really need to figure out something that’s going to put their trajectory up this year,” said Kniaz.