Available in 600 cities across 65 countries, Uber has truly conquered the ride-hailing market. However, the company has set its sights on new heights: the sky.

With test flights due to begin next year and plans for a commercial launch in 2023, depending on regulation, Uber envisions that soon customers will be able to access on-demand flights at the push of a button.

Uber plans to use electric VTOLs (vertical take-off and landing vehicles), designed to be pilotless, for their flying taxi service, which will see up to four passengers transported between different locations using what is described as a cross between a helicopter, a drone and a fixed wing aircraft for short-haul flights.

Uber has unveiled the next phase in launching its Uber Air aerial ride-sharing service at its third Elevate Summit, revealing a key part of plans to get Uber Air off the ground.

With an increase in urban air traffic, up to 1,000 landings per hour according to the company, Skyports are a necessity if city infrastructure is going to accommodate eVTOLs. Designed to operate like an airport or heliport, Skyports need to accommodate vertical take offs and landings with a small urban footprint.

Although Skyports may soon become a common feature of urban landscapes, they are currently an unknown. To solve this design challenge, Uber selected eight architecture and engineering firms to showcase their concepts for its network of connected mobility hubs, referred to as Uber Skyports: Beck, BOKA Powell, Corgan, Gensler, Humphreys & Partners Architects, Mithun, Pickard Chilton + ARUP and SHoP.

The result of this was 16 new designs for Uber Air Skyports concepts, the first glimpse at what Skyports could look like when Uber Air launches in Dallas, Los Angeles and Melbourne.

Designs include Gensler’s Cityspace, a “central place to shop, dine, and engage while reducing congestion across the city”, SHoP Architects Arc, Corgan’s CONNECT | EVOLVED, which is designed to be build over a road, Humphreys & Partners Architect’s, which is designed to look as if it is suspended in the air, and Mithun’s SkyPark” which features trees to absorb excess noise. 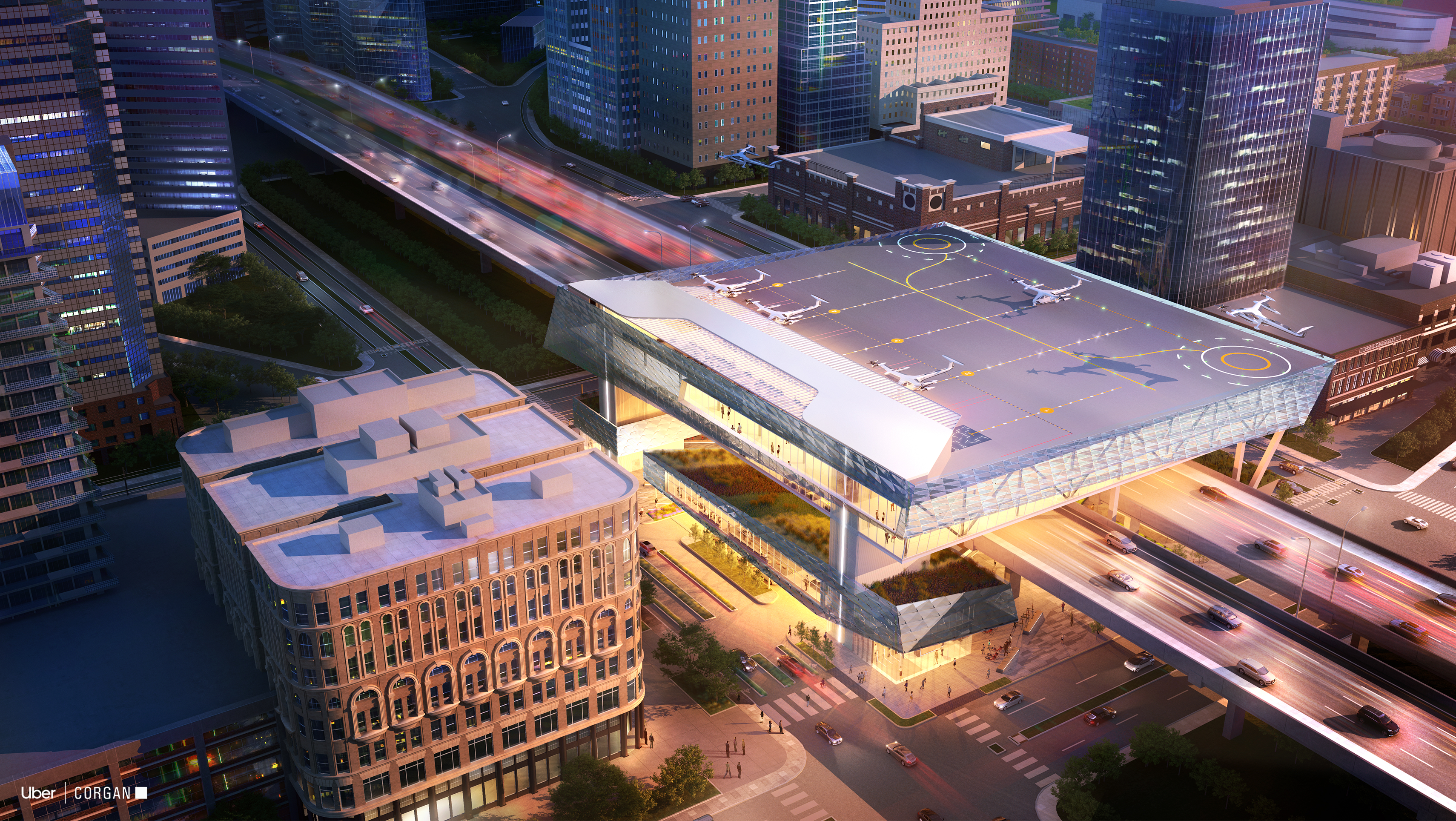 As well as facilitating air transport, the company has said that the designs must “integrate with the community, minimize noise, embraces sustainable materials and consciously plans for energy use.” All the concepts also include space for electric bikes and scooters, EV charging infrastructure, and a connection to public transit.

All entries were judged on market readiness, cost, environmental and regulatory awareness, charging and power generation and noise.

“With the first launch of Uber Air just a few short years away, this collection of Skyport Mobility Hub concepts establish a practical, sustainable vision for the infrastructure needed in the communities we plan to serve. These designs represent a synergy of purpose, orchestrating a seamless transition between ground transit like Uber Pool and eVTOL aircraft on the roof tarmac – all while contributing to the surrounding neighborhood.

“Architectural minds carry the responsibility to imagine the world in a way that does not exist yet and make it a reality. So this year, we invited innovative architectural firms to imagine how connected Skyport hubs could be integrated into the urban landscape of Los Angeles, Dallas and Melbourne.”

Read more: Urban air mobility in the UK: When could flying taxis arrive in London?