The 2018-19 UEFA Champions League will get underway this evening.

The best teams in European football will be pitted against each other to compete to become the champions of Europe. However, the prize that clubs will want to win most is the €82.5m ($96.4) that the eventual winner will receive.

The tournament has come a long way since its 1992 rebranding, when 36 teams were competing for a total prize pool of €400m. Today that stands at €1.95bn.

Verdict looks back at how the prestigious UEFA Champions League tournament has grown over the past 26 seasons. 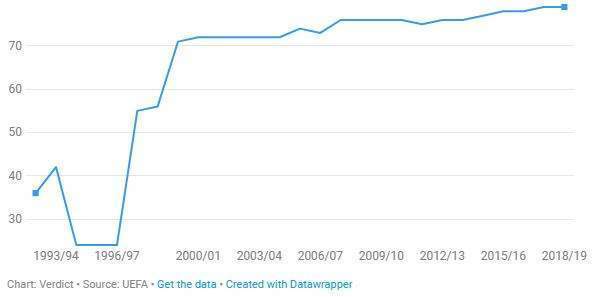 When the European Cup was first rebranded as the Champions League ahead of the 1992/93 season, the competition was more true to its name than in recent years. The inaugural Champions League featured 36 teams in total, all of which had won their respective top flight national league the season before.

The number of teams almost doubled in the 1997/98 season as UEFA decided to extend an invite to the runners-up from a eight of Europe’s biggest domestic leagues. Germany was given three spots, while England, France, the Netherlands, Spain, and Turkey were given two spots each.

In the 1999/2000 season UEFA added a second group stage, which allowed the competition to expand to include more than 70 teams. This later became the round of 16 knockout stage in the 2003/04 season.

The number of teams has climbed gradually over the past 15 years. This year will see 79 teams compete to be crowned champions of Europe. 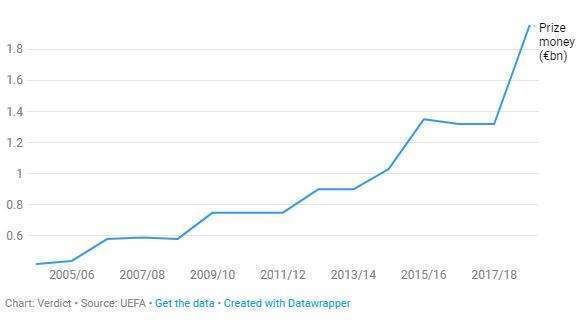 Prize money data from the early days of the Champions League is not publically available. However, UEFA has been publishing this data since the 2004/05 season, which reveals just how much the money on offer in football has increased in the last decade.

The amount of money distributed between the 32 teams competing in the main stage of the Champions League stood at €420m in 2004. This year, the total prize distribution will rise to €1.95bn, a 48% increase on last season’s total.

Fuelled by increasingly large television broadcasting rights payments and a growing number of sponsors eager to put their products in front of the competition’s large audiences, prize money has grown by 12.6% on average each year since 2004.

If prize money continues to grow at the same rate, UEFA will be distributing €7.22bn between Champions League clubs by 2030. That’s a 270% increase on the current prize. While that may sound absurd, it’s worth remembering that the Champions League prize pool has climbed 364% since 2004.

In 2009, Sky paid $480m for the exclusive rights to air Champions League football in the UK. Six years later, BT Sport paid more than double that amount for the same deal.

BT Sport broke its own record this year by agreeing to pay $1.45bn to air the tournament to UK audiences for the next three seasons. And according to data provided by sports market intelligence company Sportcal, these big money deals are becoming the norm.

According to Sportcal data, UEFA have agreed 61 new media rights deals for the tournament so far this year. Combined, these deals have generated more than $7bn.