The UK is enjoying a long-term decrease in the emissions of some of the major air pollutants, including nitrogen oxide and sulphur dioxide.

This is according to its latest UK air pollution levels report, covering the period of 1970-2016, released today.

Whilst today’s report doesn’t cover all air pollutant emissions, it covers sulphur dioxide, nitrogen oxide, non-methane volatile compounds, ammonia and particulate matter. Aside from ammonia, all of these emissions have fallen in 2016.

Emissions of sulphur dioxide, which causes acid rain and deforestation, are at their lowest levels in 1970. The emissions have fallen by 97 percent in the time period, to 0.18m tonnes. The UK needs to continue on this downward spiral in order to hit the Gothenburg Protocol emissions targets by 2020.

In addition, PM2.5 emissions, only of the deadliest set of pollutant emissions according to the World Health Organisation (WHO), reached their lowest level since 1970.

However, emissions of ammonia increased between 2015 and 2016, up by 3.2 percent, following an increase in agricultural emissions. This is mainly because of the manure management of larger dairy herds and the spreading of fertilisers. 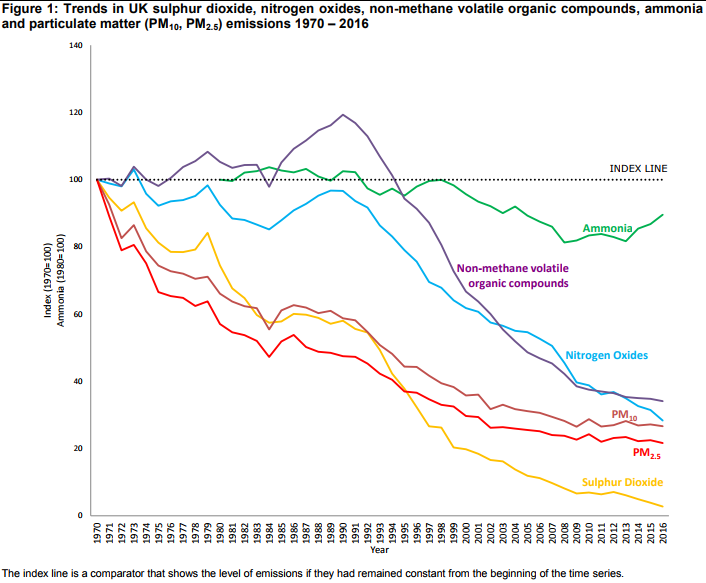 The Department of environment, food and rural affairs (Defra), said:

“Reductions in air pollutant emissions are being achieved through regulatory controls and other means across industry, domestic and transport sectors.

Professor Mark Sutton, environmental physicist at the Centre for Ecology and Hydrology, said the increase in ammonia emissions is perhaps unsurprising, calling it a “Cinderella issue”.

“The trend in emissions is therefore no surprise as the UK has very little by way of policies to reduce ammonia emissions from farming. For example, the use of methods to reduce ammonia emission from manure spreading has been mandatory in a few parts of Europe for over 20 years. As car fleets have been adapted for low-emissions, ammonia has become a Cinderella issue that has been long neglected.

“If emissions continue to increase at the present rate, the UK will be 20 percent above its committed emission ceiling for 2020.”

This is good news for the UK government which has regularly come under attack for failing to tackle air pollution. Activists have called for a new Clean Air Act, however, Defra has said it has a £3.5bn plan in place to improve air quality already.

This year, London has breached its annual air pollution limit within a month. This was due to nitrogen dioxide levels in Brixton Road, Lambeth. However, this was an improvement from 2017, when the legal limit was breached in only five days.

Air pollution is a major issue in the UK. Last year, a report by the WHO showed that 44 out of 51 British towns and cities failed emissions tests.

The tests focused on the PM2.5 emissions, which have been linked to causing heart disease and premature death. As a result, the WHO said millions of people in the UK are inhaling air considered too dangerous to breathe.

The UK government has implemented a ban on the sales of new diesel and petrol vehicles to come into force from 2040 in order to tackle UK air pollution.