As we head towards a future where global populations are set to become increasingly urbanised, it is important to protect and plant urban trees in order to be able to build liveable and sustainable future cities.

Without trees life could not exist on Earth as they produce the most of the oxygen that human and wildlife breathe. They absorb carbon dioxide from the atmosphere to release oxygen via photosynthesis. Without trees there would be no rain, as they absorb the water from the soil and release it through evapotranspiration.

The case for urban forests

A new study by UCL, published in Carbon Balance and Management, is designed to help to better understand the value of urban trees and influence future urban planning.

Sir Harry Studholme, Chair of the Forestry Commission said: “The trees in our cities are important. They matter because they are close to people and are a key component of our urban environment providing beauty, shade and homes for myriad species as well as absorbing carbon and pollutants. The work being carried out at UCL is adding colour and detail to this understanding.”

Dr Mat Disney, co-author and leader of the UCL Geography LiDAR research group, said: “An important outcome of our work was to highlight the value of urban trees, in their various and very different settings. The approach has been really successful so far, so we’re extending it across London, to other cities in the UK and internationally.” 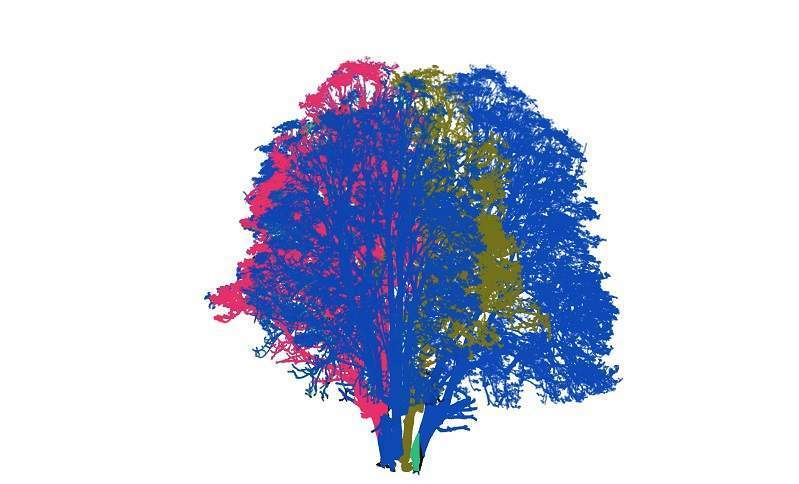 A digital scan of trees undertaken as part of the study

A study published in Carbon Balance and Management, used publicly available airborne Light Detection and Ranging (LiDAR) data collected by the UK Environment Agency, combined with ground-based LiDAR measurements, to generate a map of carbon stored in an estimated 85,000 trees across the London Borough of Camden.

“Urban trees are a vital resource for our cities that people walk past every day,” said Dr Phil Wilkes, lead author of the study “We were able to map the size and shape of every tree in Camden, from forests in large parks to individual trees in back gardens. This not only allows us to measure how much carbon is stored in these trees but also assess other important services they provide such as habitat for birds and insects.”

Ground-based LiDAR is a new technique pioneered by the team at UCL to measure carbon in tropical rainforests. This is the first time this technology has been used in UCL’s local London borough, Camden. Previous estimates of carbon stored by urban trees have relied on measurements from trees outside of cities, which may be quite different.

LiDAR technique uses millions of laser pulses to build up a very detailed picture of the 3D structure of trees. This allows an accurate estimate of how much carbon the trees have absorbed via photosynthesis during their lives. It also estimates the carbon sink provided by urban trees, important for helping to offset fossil fuel emissions.