Forced off of the dark web by the closures of notorious illegal goods marketplaces such as Silk Road and The Farmer’s Market, drug sellers are now operating in plain sight, using encrypted messaging app Wickr to hide their crimes.

However, unlike Silk Road, Wickr never intended to be a platform for the internet’s shady underbelly to operate.

In fact, Silicon Valley software company Wickr Inc. created their messaging app by the same name back in 2012 as a way of protecting the corporate world from some of the online world’s most notorious criminals.

With hacks and data breaches now common, Wickr was created to secure potentially valuable conversations and information from these digital thieves.

On the surface, Wickr is just another messenger platform. It’s much the same as more popular apps like Whatsapp, Facebook Messenger and Telegram.

However, under the hood, this instant messenger is working hard to ensure that nobody other than the sender and the recipient ever sets eyes on exchanged messages.

The app uses end-to-end encryption on all messages and files, including pictures and videos. This ensures that third parties are unable to access the data as it transfers from one device to another.

Likewise, much like popular photo-sharing app Snapchat, Wickr also allows users to set messages to “auto-destruct”. Users are able to set a time for each conversation between one second and six days. Wickr securely deleted the message from its system as soon as this time is up.

For the particularly security-conscious, users are able to verify the identity of their contacts by exchanging “keys”. Each user sends a short video in order for the other person to confirm that they are speaking to the right person.

According to Wickr, the level of security that their app offers means that it would take trillions of years to gain access to even one message. Even then, the message would have long since expired.

Built using $73m of investors’ money, Wickr was created for a legitimate purpose. The app secured early funding from some of the biggest names in the investment world. The likes of early Facebook investor Jim Breyer and Gilman Louie, the founder of the CIA’s strategic investor In-Q-Tel,  are among the company’s backers.

However, Wickr hasn’t quite attracted the crowd that it, or they, would have been expecting.

While great in principle, less legitimate enterprises have set up shop on the business-friendly messaging app.

Wickr is open to everyone. Users can download the app for free via the App Store on iOS or the Google Play store on Android. As a result, criminals are exploiting the protection that Wickr offers to keep their activities well hidden.

The Wickr subreddit reveals a lengthy list of request for various illegal substances. Somebody in Hong Kong is openly looking for cannabis and another in Melbourne is on the hunt for LSD. 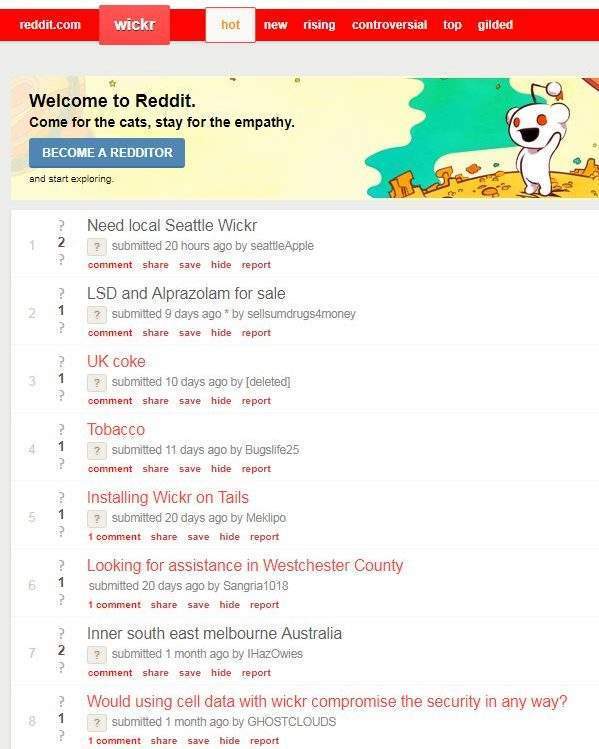 Mixed in with the numerous messages requesting banned substances, there are also a fair number of users brazenly offering drugs for sale. These posts are complete with Wickr usernames, allowing buyers to contact them via the private messaging app.

And that is just on the official Wickr subreddit. There are numerous others places were buyers and sellers are swapping details with the intent to buy and sell illegal drugs.

According to Vice, this was particularly prevalent on the DNMUK subreddit, a popular forum for UK based drug users, which has since been banned for violating Reddit rules.

This is a growing trend. Past reports suggest that there has been a rapid increase in drug dealers using social media platforms to attract customers. They then switch to apps like Wickr to confirm sales and make transactions.

As messages are purged, no traces are left behind, making it a safe space for criminals to operate.

Microsoft Teams gets end-to-end crypto, no matter what the Five Eyes say