Back in its youth, Whole Foods was the cool kid of grocery retail.

True, it never had the popularity of the high school jocks or cheerleaders, but its authenticity and pioneering thinking afforded it much positive attention, and some adoration.

As it enters its 39th year, Whole Foods is no longer quite so hip.

The nimbleness of its youth has been replaced by stodginess, complete with a serious slide in productivity, margins, and market share.

The clarity of its purpose has given way to the befuddlement of a mid-life crisis as it tries to get its mojo back.

Where did it all go wrong?

The blunt answer is that Whole Foods has not moved with the times. Consequently, its proposition has become unbalanced.

There’s no denying that the company still meets its original values of selling quality, healthy food in a way that benefits the communities where it does business.

However, it has failed to fully appreciate that these factors are no longer sustainable points of difference.

Almost every US grocer now has a strong organic section, and rivals like Sprouts have, at least in part, successfully replicated Whole Foods’ healthy stance.

Where Whole Foods once stood head and shoulders against its rivals, it is now only a few inches above them. 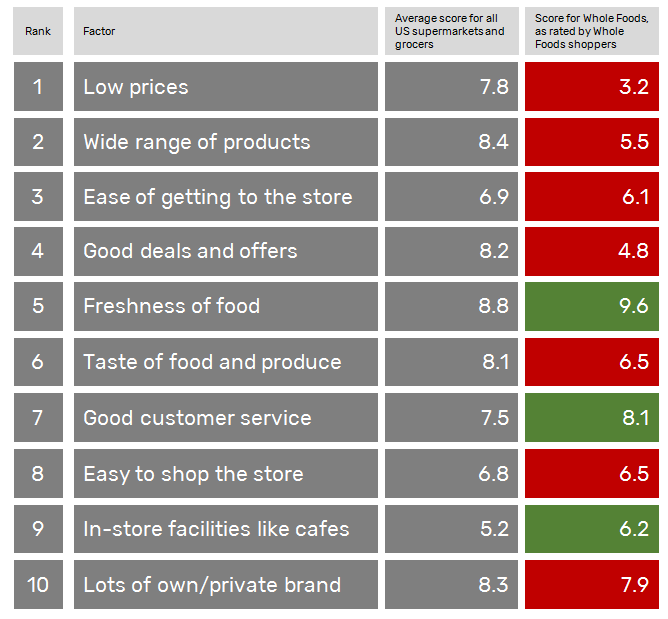 The ubiquity of factors that were once unique means that fewer customers now cite them as being the main reasons for picking a grocery store. Of much greater importance are factors like price, taste, and product range. Across these attributes, Whole Foods scores badly.

The worst score is for price.

Admittedly, over the past year Whole Foods has worked to remedy the perception that it is expensive by reducing the price of staples and investing more in its cheaper own brands.

It has even launched a lower priced format called 365 to attract younger shoppers. However, while margins have fallen, perceptions have not shifted and the sales slide has continued.

The reason for this is largely down to Whole Foods’ failure to understand that prices matter less than value for money, and that value comes from a balanced proposition that has many sustainable points of difference, and not just from one that majors on healthy food.

An example of this lack of balance comes in the form of taste.

Here Whole Foods is rated less favourably than rivals overall, and under the headline figure its scores are variable.

Some areas, like bakery, are highly rated; others, including pre-prepared and hot food, are far weaker. As much as some consumers want wholesome food, they do not want this to be to the detriment of taste, especially when they’re paying a premium for it.

Another example can be seen in Whole Foods’ stores.

Some, especially older ones in urban centres like New York City, are shabby with mediocre customer service.

Read more: Supermarket trucks in the UK are being fuelled by wasted food

Even new outlets suffer from narrow aisles and poor layouts. Such things make customers question why they are paying higher prices. They also suggest a lack of attention to detail, and a poor understanding of what customers want from a shopping experience.

From all this come two lessons Whole Foods needs to take on board.

First, there is now much more to food retail than the nexus of health, ethics and sustainability that were so important during those early days. Second, that high prices must be justified with added value and a superior experience across all areas.

If it comprehends and acts on these points, Whole Foods can finally restore some of the lost vigour of its youth.