Japan’s economy grew at its fastest pace for more than two years in the second quarter amid high consumer spending and capital expenditure.

The world’s third-largest economy, after the US and China, is enjoying its longest economic expansion in a decade.

Gross domestic product expanded at an annualised rate of four percent in the April-to-June period, according to a preliminary estimate from the Cabinet Office, surpassing economists’ forecast of a 2.5 percent rise. 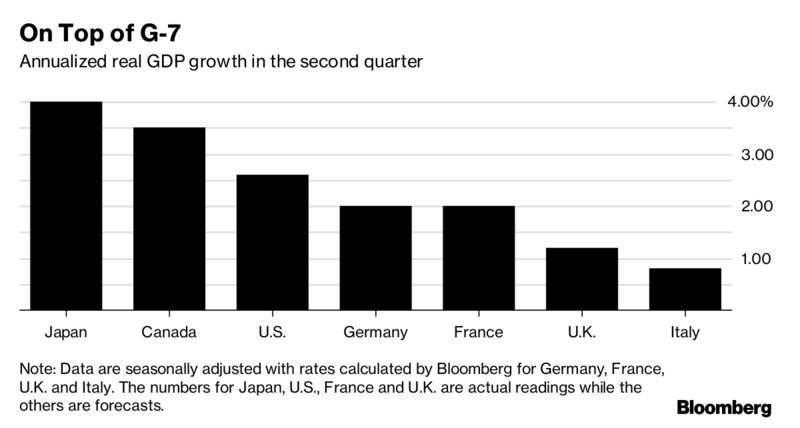 The economy grew one percent compared to the previous quarter, up from a revised 0.4 percent rise in the quarter before that.

Why is the Japanese economy doing well?

Rising exports, including smart phones and memory chips, as well as investment tied to the Tokyo 2020 Olympics boosted the Japanese economy in recent months.

Business confidence is also high, with the Nikkei average rising more than 30 percent in the past year.

Strong domestic demand in Japan saw private consumption, which accounts for more than a half of the country’s GDP, rise by 0.9 percent.

Japanese citizens are splashing out on big ticket items such as cars and home appliances. They’re also dining out more.

The latest figures, pointing to Japan’s strong growth are an encouraging sign for Japan’s prime minister Shinzo Abe, who has struggled to retain the confidence of the electorate amid a series of scandals.

His Abenomics reforms, a scheme of huge monetary easing, government spending and structural reforms, has helped to reignite growth.

Although the latest public opinion polls put support for Abe at less than 30 percent, the country’s stronger economy could boost his approval ratings.

“I’m sure Mr Abe will be very happy with this GDP report particularly because other statistics such as industrial production are also strong,” said Masaki Kuwabara, an economist at Nomura.

Increasing consumer prices has been a key aim of the Japanese government for years, but under Abe, prices seem to finally be rising.

Following the collapse of an equity and property market bubble in the early 1990s, Japan has battled years of deflation and slow growth.

When prices are so low, consumers put off making purchases in the hope that prices will drop even more. The result is that businesses produce less, hold back on hiring new staff and become unwilling to increase employees’ wages.

Most important is the stabilisation of prices in daily products during the quarter, that supported real private consumption by pushing up the purchasing power of consumers, especially pensioners.

The main driver of Japan’s higher-than-expected growth was a debt-financed one-off 21.9 percent annualised increase in government investment. Markets have reacted with caution, and there is logic to it because we have seen this before. In 2015, we saw a similar abrupt growth in Japan’s GDP that only went on to fade into the end of the year to more normalised figures. In a country that already has a public debt to GDP of 250 percent, investors are likely to remain suspicious of these elevated figures.

The Bank of Japan’s balance sheet is close to 90 percent of Japan’s GDP.