India’s Supreme Court is set to make a judgement on the practice known as “triple talaq” where a Muslim man can divorce his wife in minutes by saying the word talaq (divorce) three times.

Other Muslim-majority countries, including Pakistan and Bangladesh have already outlawed the practice.

A multi-faith bench made up of five male judges — a Hindu, a Sikh, a Christian, a Zoarastrian and a Muslim will preside over the case.

Some commentators have expressed outrage that there is no female voice on the bench.

The Supreme Court “really thought that a bench of men could just decide for women what’s best for them,” wrote Sharanya Gopinathan in an article for The Ladies Finger, an online women’s magazine.

At present, only one member of India’s Supreme Court is a woman — in total, six women have held the position since 1950.

Muslim marriages and divorces are governed by Sharia law.

According to the Islamic Sharia Council, a British organisation that provides legal rulings and advice to Muslims “due to the financial responsibilities which he has to bear, the right to divorce in Islam is primarily given to the husband”.

However, the unilateral instant so-called triple talaq divorce is not explicitly mention in either Sharia law or in the Koran.

India’s prime minister Narendra Modi has supported calls to end the triple talaq practice in a speech in the northern state of Uttar Pradesh last year.

“The lives of Muslim women cannot be allowed to be destroyed by ‘triple talaq,” Modi said at the time. “It is the responsibility of the government and people of the country to give justice to Muslim women.”

Secularism UK, Britain’s only national organisation working exclusively towards a secular society agrees that the law is a violation of women’s rights.

“When Muslim personal law violates the rights of citizens, as it clearly does for Muslim women, the state must intervene to protect human rights. We hope the court sides with the petitioners and takes steps to protect the fundamental principle of one rule for all,” a Secularism UK spokesman told Verdict.

He added that the instant divorce practice still takes place in the UK.

“This isn’t just a problem in India. We know that many Muslim women in the UK are threatened by their husbands with these unilateral, instant ‘divorces’. Many women are then left penniless or homeless after they are ‘divorced’, because they believe these sham arrangements are legal marriages, when they are not.”

However, conservative Muslim clerics and groups stand by the legitimacy of the practice.

Last April, when the issue was last taken to the Supreme Court, judges refused to enforce a ban on the triple talaq.

At the time, the All India Muslim Personal Law Board (AIMPLB), a private body working to protect Muslim law in India defended the triple talaq.

The “triple talaq was necessary, saying men have greater reasoning power compared to women, and that a man giving triple talaq to his wife was a better option than murdering her or burning her alive,” the AIMPLB told the Supreme Court.

What follows the instant divorce for Muslim women in India is often financial insecurity.

According to a report published in 2015 by Bharatiya Muslim Mahila Aandolan, an organisation which fights for the rights of Muslim women in India, 79 percent of women received no maintenance support after the seperation.

Over 40 percent of women were not able to retrieve their belongings, jewelry and valuables from their husband’s house after the divorce.

Many Muslim men in India divorce their wives by letter, telephone, or even by text message. 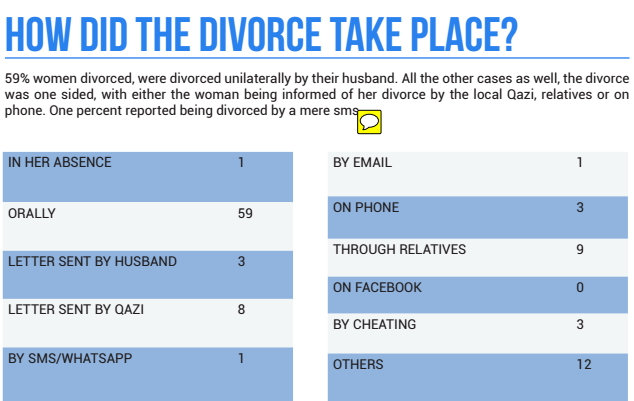 The Supreme Court hearing will take place over the next six days.

There are an estimated 155m Muslims living in India. Islam is the country’s largest minority religion.