If Brexit causes an ‘exodus’ of financial firms and their employees from London, exactly where would they go? Agglomeration benefits would suggest Paris.

Agglomeration benefits refer to the advantages firms gain by locating near other businesses in the same industry. In finance, these include access to large pools of specialised and experienced labour, proximity to professional bodies and clients, as well as flows of information.

GlobalData reports that in 2016 Paris’ financial intermediation and real estate output was $267bn, which is equivalent to 40 percent of the city’s Gross Value Added (GVA). This is larger in both absolute and relative terms than the other cities competing to gain from the potential movement of business after Brexit.

When considering agglomeration benefits, Paris appears to be the optimal location for financial firms seeking to leave London. 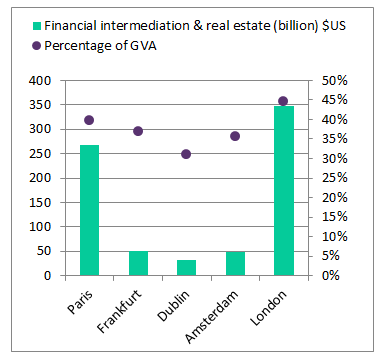 Indeed, the French capital has made strenuous effort to woo the financial institutions considering a move to the continent, including a tax break as large as 50 percent for French nationals returning to the country, in an attempt to attract high earners.

Additionally, banking heavyweights have shown an interest in the city; both Goldman Sachs and HSBC have speculated moving jobs to Paris.

However, despite all that Paris has to offer, the city lacks the breadth and depth boosted by London’s financial sector.

The French capital ranks just 29th on the Global Financial Center Index – a measure of competitiveness of global financial centres – below Frankfurt (19th) and London, which holds the top spot.

The full extent of job and business relocation due to Brexit is unclear. London’s heritage as a global financial centre has not relied solely on the EU; English common law, language and time zone have all contributed to the city’s success. As such, an ‘exodus’ by London’s financial companies and employees seems unlikely to occur.

That being said, gaining a better understanding of the factors which will influence any shift in financial sector dynamics will aid business decisions in these uncertain times.